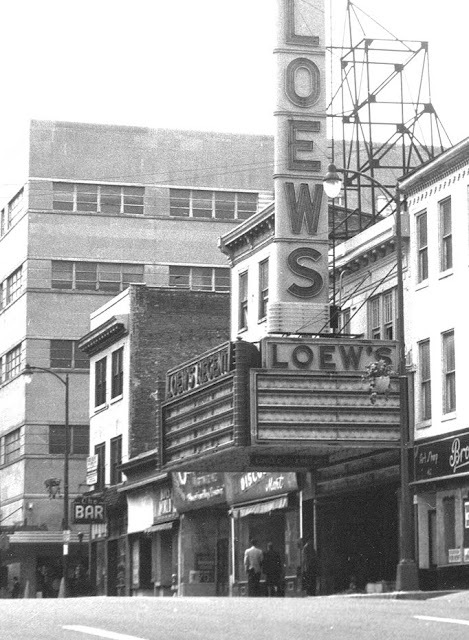 The Regent Theatre was opened by 1915, and became the Harrisburg chapter of the national Loew’s chain of Metro-Goldwyn-Mayer ‘flagship’ theatres from May 1925. Considering the grandiose reputation of the MGM product the Loew’s Regent Theatre was an attractive and well-kept but relatively modest establishment.

There was a large, three-sided rectangular marquee with the dual name of the theatre spelled out in large letters above the front panel and simply ‘Loew’s’ above the two side panels. Space for attractions information was provided on all three (side and front) panels.

Perhaps the grandest aspect of the Loew’s Regent Theatre was the large vertical sign that towered above the unprepossessing building that housed the theatre and which again spelled out ‘Loews’ in gigantic letters. (The theatre itself was part of a somewhat dingy row of old buildings that included a corner bar, a novelty shop, and an art/photography shop).

On approaching the theatre itself there was a stand-alone ticket booth that was set in a square exterior space which was bordered with display windows for posters of current and coming attractions and which led to the entrance doors.

The interior was more in keeping with the MGM penchant for glamour with a small but elegant lobby that was flanked by two marble staircases (straight out of an MGM musical number) that ascended to the lounges and balcony.

Sometimes billboard-size displays for major MGM productions (such as “Quo Vadis” and “An American in Paris”) could be seen in the lobby. The exterior front of the theatre was often embellished with elaborate displays as well.

Neither the actual auditorium nor the screen were especially grandiose and when Loew’s converted to CinemaScope around 1953 the screen seemed more scaled down and compressed than enlarged.

In its prime the Loew’s Regent Theatre was the exclusive Harrisburg first-run theatre for most of MGM’s incredibly prolific output of period epics, musicals, and melodramas, as well the studio’s series of often well-produced B-movie and noir programmers. (I especially remember 1950’s “Mystery Street” with an unforgettable shot of a skeletal hand, that of the murdered Jan Sterling, sticking out of a sand dune!)

But it also showed the occasional oddball independent picture. I saw both Lippert’s unforgettable “Rocketship X-M” as well as “Bwana Devil”, the infamous first 3-D feature, at the Loew’s Regent Theatre.

A victim of the 1950’s trust busting that forever altered the production/distribution system of studio era Hollywood, Loew’s Regent Theatre was razed in 1961.

Forgot to mention I first saw “North by Northwest” at Loew’s Regent.

I wish they would restore Loew’s State as a film theater. Apparently it has a long history of association with MGM and I’m a huge MGM buff.
I will definitely check out the CT page, thanks.

A great page! Also big.
I’ve only had time tonight to skim over it. (I just got back from the downtown Disney Hall).
But the ad for “Forbidden Planet” was wonderful. I only wish I could have read all the small print (the “Id” article!) and wish whoever posted it had put a newspaper date along with it.

I add to this album of vintage theater photos & memorabilia from time to time:
View link

This is a great shot. It’s wonderful to see (obscured behind the flags and under the marquee) the film poster material they used to plaster around the entrance and a film (and short subjects!) on the marquee. I remember all that well. My photos were unfortunately taken after Loew’s REGENT closed. Thanks for the link.

The Regent Theatre at Harrisburg was in operation by 1915, and was taken over by Loew’s in 1925. The May 9, 1925, issue of Harrisburg daily, The Evening News, featured several items about the theater, and a full page ad by the Regent’s former operator, Peter Magaro, which said that Marcus Loew would begin operating the house on May 11. The ad also mentioned that Magaro had been in the theater business at Harrisburg for twenty years.

Another article in the paper says that the Regent was on the site of a “store show” Magaro had run in his early days in Harrisburg. He later bought the property and had the Regent built on it, but the article doesn’t say what year the house was erected. Magaro and the Regent were mentioned in the September 4, 1915, issue of The Moving Picture World. A 1916 MPW item gave the address of the Regent as 410 Market Street, so it was definitely the same location.

Items in various construction journals in 1917 indicate that Magaro was intending rebuild the Regent at that time. Plans, by Hoffman & Co., had been approved in April and bids were to be taken in September, but the next mention of the rebuilding I’ve found is from 1921, when the November issue of the construction journal Stone ran this item:

“The new Regent moving picture theatre, being built by Peter Magaro on Market Street, Harrisburg, Pa., will have a stairway of Pavonazzo marble, while the walls and wainscoting will be of gray Napoleon marble. The work is being done by Alexander Pelli & Co., of New York”

I’ve been unable to discover the reason for the delay of four years. An April 8, 1925 Harrisburg Telegraph article about the projected sale of the Regent to Loew’s said only that Magaro had rebuilt the theater “…several years ago….” Loew’s was offering $275,000 for the house, but Magaro had not yet accepted. Perhaps he got even more.

The rebuilt Regent Theatre opened on December 21, 1921. The December 20 issue of the Harrisburg Telegraph said that the project had been designed by local architect Clayton J. Lappley.

The Regent Theatre opened January 18, 1915 with “Officer 666.” The New Regent Theatre updating was architected by Clayton J. Lappley and Ritchie Lawrie of Lawrie & Lappley. Both launch ads in photos.