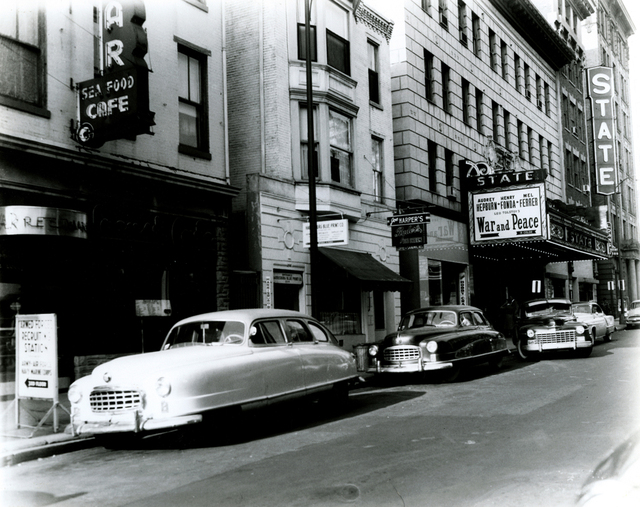 The State Theatre was located on Locust Street between 2nd Street and 3rd Street, a little ways down from Capitol Park. The site had been occupied by theaters since approximately 1900. First on this site was the Lyceum Theatre and then the Orpheum Theatre, the latter was demolished in 1925 to make way for the State Theatre.

The State Theatre was housed in a large stone building and featured a wide, narrow rectangular marquee with small display panels on each end. A large vertical sign towered three stories at one end of the marquee.

An ornate stand-alone ticket booth was in a wide but narrow exterior space with several entrance doors. The interior of the State Theatre maintained the most overtly theatrical ambiance of any Harrisburg theatre.

There were two lobbies, the first a kind of arcade, and the second an elaborate, palatial affair with chandeliers and much architectural detail. Restrooms were downstairs at opposite ends of the second (main) lobby that also included several display frames for posters and a refreshment stand. I seem to recall a second-floor balcony (mezzanine) space over this lobby that led to the actual seating balcony.

The State Theatre had one of the largest auditoriums and screens in the city. It certainly had the largest screen when it was renovated for CinemaScope in 1953. Fox’s "The Robe" kicked off the wide-screen revolution in Harrisburg with a huge curved screen and a state-of-the-art 4-track stereophonic sound system.

During the 1940’s and 1950’s the State Theatre alternated Fox, Warner Bros., Paramount, and Columbia releases. A relative also recalls big bands and stage shows at the State Theatre in the 1940’s. In the 1960’s films such as "The Wild Bunch, " “Barbarella," "Such Good Friends”, and "2001, A Space Odyssey" were screened.

Alas, "2001" did not prove prophetic for the State Theatre which was razed in the early-1970’s to make way for an office building. Poor choice for Harrisburg. It would have made a wonderful downtown performing arts center.

John S in York, you commented that WCMB-TV was in the State Theatre building. Was the theatre building large enough that it included addresses on Court Street (essentially at the north-east of the building)? I have newpaper articles and equipment invoices that indicate that the station was located at 228-232 N Court Street, not on Locust St.

By the way, WMBS, the forerunner of WHP, had studios in the theatre building and a transmitter shack on the roof in the late 1920’s. The station was owned by W.S. “Mack” McCachren. The shack suffered a fire in March 1927 after only two months of operation. The transmitter was moved to Lemoyne later that year, but the studios stayed in the theater building until around 1930 when the Stackpole family bought WHP. (Ironically, the studios only moved one building away to the Harrisburg Telegraph building at 216 Locust.)

Tim: A good question, and one that someone with access to an old map could probably answer for sure, but I think I have a partial answer.

WCMB-TV was not in the State Theater Building as I had heard many years ago from a now-deceased co-worker at WKBO. Since the address on Court Street would seem to be in the right vicinity, I had no reason to doubt it. However, today I asked a co-worker (I think you know Mr. Kauffman) who had worked at WCMB radio in the early 1960s. He tells me WCMB-TV was located on Court Street between Walnut and Locust behind what is now the Federal Building, constructed in 1964. Court Street, then and now, is little more than an alley, but many businesses had addresses in those little side streets.

I’m not quite buying that location, however, as the 200 block of Court Street is north of Locust, and 228-232 would be about midway between Locust and Pine, well north of the Federal Building. Perhaps someone else could pinpoint that address. If WCMB-TV was not in the State Theatre Building, what building was it in?

While I was originally told the old TV studios were â€œintact,â€ I took that as meaning the rooms in which they were located were still recognizable as TV studios but that the actual equipment had been dismantled.

No problem at all, John!

Dr. Bill is just one block off. A quick search online shows 228-232 N Court St. to be on the west side of Court directly behind the PA Rural Electrical building on Locust St. (where the theatre building once stood).

Judging by nearby buildings, it’s not impossible that the theatre building extended to the Court St. addresses. I’ll keep an eye out for more info.

I was the last manager at the State Theatre in Harrisburg, Pa. It closed in October and I want to say 1975. They ran an article in the Patriot News showing myself and “Hop” my assistant manager with the story of the eminate sale. I have been trying to find that picture for years. I am currently 57 years young and live in the West Palm Beach / Palm Beach area. I worked for United Artist Theatres. They leased it from Fabian Management. The Fabian family decided to get out of the movie theatre ownership. The also owned the State Theatre in Allentown as well as a theatre in Easton. UATC acquired the newly completed Camp Hill Twin theatre which was the last Fabian theatre to be built. Unfortunately UATC found a buyer in Alleghany Utilities and negotiated the sale of the property and thus ended their obligation with Fabian on that property. The city of Harrisburg never had the chance to make a move to preserve the property.

Anyone with pictures should communicate to . Thanks Joseph

I think the Fabians also owned the Colonial Theatre in Harrisburg.

I have the console from the Marr & Colton Pipe organ that was installed there, it is in excellent restored condition, but not connected to any pipes to play at this time.

Articles about the opening of Wilmer & Vincent’s new State Theatre appeared in the April 12, 1926, issue of the Harrisburg Telegraph. One of them noted that the new theater had been designed by E. C. Horn & Sons.

yes the Fabians operated the Colonial Theater. The Colonial theater had the worst electical wiring. I worked there for a short stint. Still hoping to find that Patriot/Evening Oct news article on the impending State Theater. I have listed my email address in the previous posting.

Does anyone know if The State was where “BEN HUR” played its initial roadshow engagement? My thanks