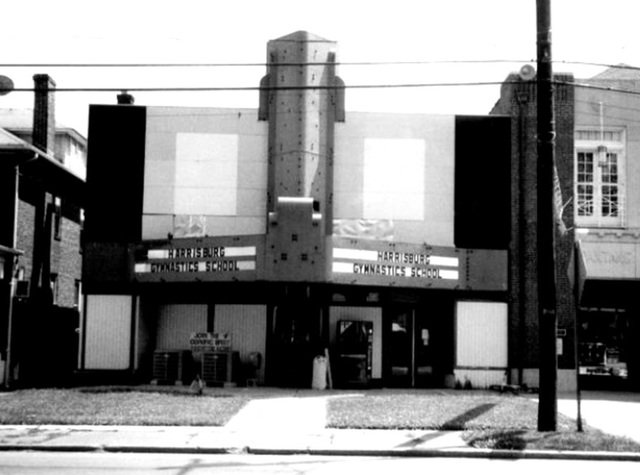 The Paxtang Theater was a small, second-run venue in a community in the Harrisburg area called Paxtang. Sporting around 500 hard, narrow seats, it opened in 1937 with a romantic comedy “Dodsworth” starring Walter Huston.

The marquee was large and elaborate for a neighborhood theater, extending out over a small grassy courtyard area with a sidewalk leading to the box office. The facade featured black, green and beige Carerra glass. Two showcases for 40 x 60 posters were on either side, along with windows for lobby cards. The fancy exterior contrasted the rather Spartan interior. A small outer lobby (with poster windows) led to a modest lobby. A small candy counter was on the right, and on the left, two large poster showcases. Between the lobby and the auditorium was a short partition about four feet high. The auditorium was longer than it was wide, and was painted a rosy color, the carpeting maroon with gold swirls. There were three sections of seating: one on each side with five seats across, and a center section with 10 seats across. The Paxtang Theater was clearly built for function, not for beauty.

I don’t know who ran the Paxtang Theater in those days, but in 1946 it was taken over by Dr. Samuel Goldstein, who over the next 20 years became one of the town’s best-known citizens, even though he never lived there. In the early days ‘Doc’ had a little stage show before the Saturday matinee and a special celebration for those having birthdays. Songs were sung and a fine time was had by all. Several movies were shown every week, two or three days at a time, as neighborhood theaters did back then.

Doc held on against the advent of television in the 1950’s but the little touches began slipping away. Movies played for a week straight by this time. The little parties ended but the matinees lived on, and are a fond memory of mine, spending almost every Saturday in the dark watching the great and not-so-great on the Paxtang’s somewhat tattered screen. As the 1960’s dawned the theater began getting shabby and shopworn. In November of 1966, Doc surprised everyone by closing the doors and walking away. We had no hint it would happen. Doc and his wife, who took tickets and kept order at night, were in their middle-60’s, and perhaps they thought it was time to retire. They placed a thanks and farewell message on the marquee and left our lives forever. Doc’s last show was “Born Free”.

The Paxtang Theater wasn’t dead, though. A year and a half later it was nicely renovated and reopened by a fellow who operated the Rainbow Roller Rink in Mechanicsburg. The new projection, screen and sound were top-notch, the marquee was given a spectacular neon treatment, and the theater triumphantly reopened with a packed house for Disney’s “The Jungle Book”. On the inside gold paint replaced the drab rosy color, with contrasting red carpeting, and a partition and doors were placed between the lobby and the auditorium. But the seats were just as hard and narrow as ever!

The theater held on for the next several years, even taking a stab at running foreign and art films for a while, but ultimately the changing demographics of the town and nearby multiple cinemas brought the Paxtang Theater to an end in 1974. The last film to grace its screen was “American Graffiti”. The next day the building was taken over by the Harrisburg Gymnastics School, which converted the theater into a gymnasium, and that is how it remains today.

I also remember a firehouse next to the theater. You can sort of see it to the right of the photo.

John S – I’d like to read your piece on the Paxtang and anything else you’ve done. How? Please let me know.

Ross, he did a great story on it..You need to read it.

I’d like to read it. Could it be e-mailed or linked?

Later in life my mother lived in an apartment to the left of the Paxtang. I used to park on the back lot and on one visit noticed a pile of trash behind the theater. Much to my mom’s mortification I immediately started rooting through it. A prize discovery, among other items, was a poster for MGM’s “Sweet Bird of Youth” starring Geraldine Page and Paul Newman.

I still have it. But canâ€™t help but wonder many posters, stills, and lobby cards were thrown out in a similar fashion? Sad.

I also remember that when I was a small child Paxtang Park (in the same general area as the theater, through an underpass at the intersection near the theater) seemed very natural, woodsy, and beautiful. I have vague memories of an old stone mill-type structure with a millpond of sparkling clear water. It was like something out of a fairy tale.

I think now one of the Harrisburg bypasses runs over or along the park.

Ross, I’ll e-mail it to you. Doc returned the larger posters to National Screen Service but the one-sheets he stored for a while and then threw out. I can tell you where lots of the movie posters Doc trashed are today. In my storage closet. A friend of my older brother made a similar discovery one day, and I started making a regular swing by to look for posters and pressbooks. Doc used to occasionally give you one if you asked but I struck up an acquaintance with the old guy who cleaned the place and he used to set them aside for me. Many are in wretched shape but there were a few gems, like four color lobby cards from “Some Like It Hot,” a one-sheet for “From Russia With Love,” and a pressbook for “A Hard Day’s Night.” Some of them will contribute to my retirement eventually!

Hello John – My e-mail is
Thanks! I’ll look forward to reading it.

We did not attend the Paxtang very often and so my memories are spotty. So I really enjoyed your piece. Many of my Central Dauphin H.S. friends lived in Paxtang and Lenker (sp?) Manor.

I have a collection of film material from the days when it was affordable to collect. I remember once the editor of Cinefantastique (for which I used to write) sold a bunch of original Disney material very cheap. I also used to find stuff in the Lancaster flea markets, Renninger’s, etc. Like a lot of movie magazines.

Was there a York theater called the Hi-Way (or something?)

When National Screen Service closed its regional exchanges in the 1970s, years upon years of posters were carted out and dumped. Savvy collectors who found out about this went dumpster diving and carried them away by the truckload, so I’ve been told. How many more were actually lost, you have to wonder. I began collecting again in the 1990s and did so for several years but haven’t done much this decade. Back then you could go to a show and actually see what you were buying. Now it’s all on-line.

One of my oldest posters came from Renninger’s flea market: “San Antonio” starring Errol Flynn. $5 around 1970. Every once in a while you find a newspaper ad from someone who has a collection to sell, or find a theater that stored them, but not often. I don’t know what direction prices are heading nowadays.

Just for laughs, check out this link:

The Paxtang Theater alternated this and another creaky old “Previews of Coming Attractions” trailer until 1966. I recall this being a little longer, and unfortunately the ending of this one is clipped, but you get the idea. It says 1940 but I’ll bet this goes back to 1937 when the theater opened.

I worked as a kid for both Doc and the Rainbow Roller rink owner at this Theatre. I lived 2 blocks away. I also worked for the Eric theater and my final job in the area was as Manager of the State Theatre in Harrisburg. I was the last manager there before it was sold.

Joe, I know who you are and you may remember me also. Your older brother worked for Doc too and was there when the Paxtang first closed. I also have the articles from when the State closed and you being the last manager. You must have some stories to tell about the Paxtang. I for one would love to hear them! As you can tell from my write-up, it was one of my favorite childhood haunts.

John Simmers or anyone else reading this site who is familiar with the State Theater and it’s closing. The Patriot//Evening newspaper ran a closing story on front page with me in my younger days. Many years hence and I don’t have a copy of that newspaper. It ran during October around 1974. My email is . That being said there has not been anything like the Old Paxtang theater when it comes to small community.