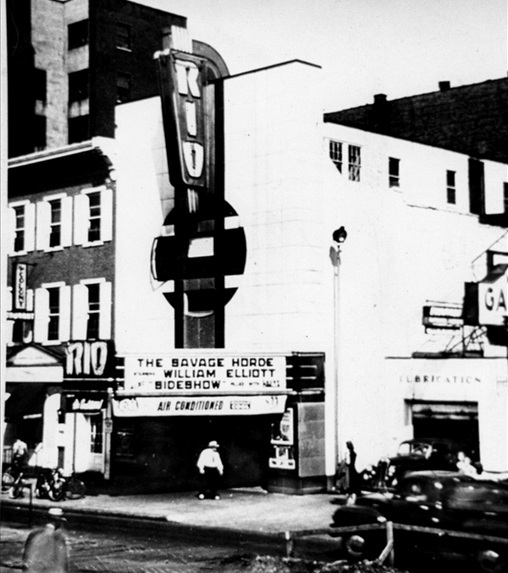 The Rio Theatre was on Walnut Street across from Capitol Park and adjacent to a large YWCA building in Harrisburg, Pennsylvania.

Built in 1908, it began life as the Majestic Theatre featuring vaudeville and shows such as "No, No, Nanette" and "Rose Marie". Deem’s Taylor’s opera, "The King’s Henchman" was performed there and artists such as pianist Josef Hofmann were booked into the house.

It also doubled as a movie theater and in 1938 settled into its final identity as a first-run movie theater, the Rio Theatre, opening with Frank Capra’s "You Can’t Take It With You". It continued to show quality film fare until the late-1940’s when it slipped into double-feature B-movie programming and a final sad decline.

The Rio Theatre was a beautiful Art Deco style theater with a three-story facade. A large vertical sign spelled out the name which also appeared at the front of the triangular marquee. What appears to be a large circular window was behind the vertical sign. I vaguely remember that the lobby area had a multi-level structure with stairs that suggested its legitimate theater origins.

The Rio Theatre was razed in March of 1955 and Strawberry Square now occupies most of the block.

Nice to read your memories of the Rio, Ross! Although the Rio existed in my lifetime (barely) I only know it from newspaper articles. I recall reading that the Rio (which was associated with the State and Colonial) became an “action house” after the Victoria on Market Street was closed and demolished for a 5 & 10 in the 1940s. Westerns were a specialty. Roy Rogers (riding Trigger) appeared on stage a few times as did many other Western stars. Harrisburg radio legend Ed K. Smith used to broadcast a live kids show on WHP radio every Saturday from the Rio. I’ve always supposed that with the demise of Westerns and B pictures (which became television) there wasn’t enough product available to sustain three theaters owned by the same company downtown and the Rio got the ax. I’ve seen photos of the exterior and it was really attractive.

You may find a photograph of the Rio on my blog.
Please feel free to check my archives for other theater photos (and for film and film music reviews) and to leave your comments.
Thank you.

Great photo of the Rio. I have a newspaper clipping with that photo. Thanks for posting that on your blog.

I was just starting to run movies at the time the Rio was about to close. My dad took me there twice, my Uncle was the projectionist, I always remember it being real neat and clean…Never worked this one…

I was just starting to run movies at the time the Rio was about to close. My dad took me there twice, my Uncle was the projectionist, I always remember it being real neat and clean…Never worked this one…

I hardly ever attended the Rio, Like JohnS the westerns and B-movies it screened never appealed to me. Then it was one of the first downtown Harrisburg theaters to be razed.
Thus I only have vague recollections of the interior. If anyone has any clearer memories I would like to read them.
JohnS, where on Market St. was the Victoria? Downtown? I don’t recall that theater at all.
Do you remember Harrisburg radio personality, Red McCarthy? He had a show broadcast from a studio on Market St. close to Front St.

After the demolition of the Rio. You can still see the gas station which is to the right in the previous photo of the theater in its prime.

BTW I now date my previous Rio photo at 1950, the year THE SAVAGE HORDE with Wild Bill Elliott (the film on the marquee) was released.