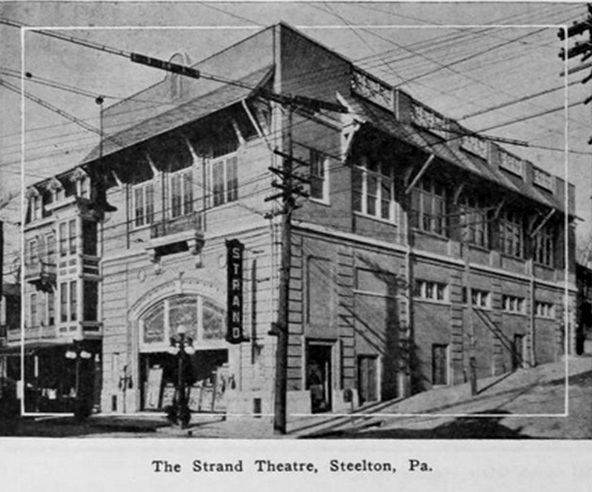 The Strand Theatre was opened on November 8, 1915 with Blanche Sweet in “Stolen Goods”. It was taken over by the Harry Chertcoff Circuit in 1938 and was remodeled to the plans of architect Paul A. Martin. They still operated the Strand Theatre in 1957.

The Strand Theatre in Steelton was in operation by 1924, when it was bought by Charles E. Newbaker, according to an item in the October 27, 1927, issue of Motion Picture News. It said that Newbaker had owned the Strand and the older and smaller Standard Theatre, the first movie house in Steelton, for about three years.

The Strand Theatre opened the second week of November, 1915. The house was built by local businessman Robert M. Frey and initially operated by Harry A. Sellers. It was designed by Harrisburg architect C. H. Lloyd (Charles Howard Lloyd.)

The Strand was extensively remodeled in 1938 after being taken over by the Chertcoff circuit.

Harry L. Sellers of the nearby Standard Theatre launched the Strand Theatre opening on November 8, 1915 with Blanche Sweet in “Stolen Goods” supported by a Vitagraph comedy short, “Quoits.”