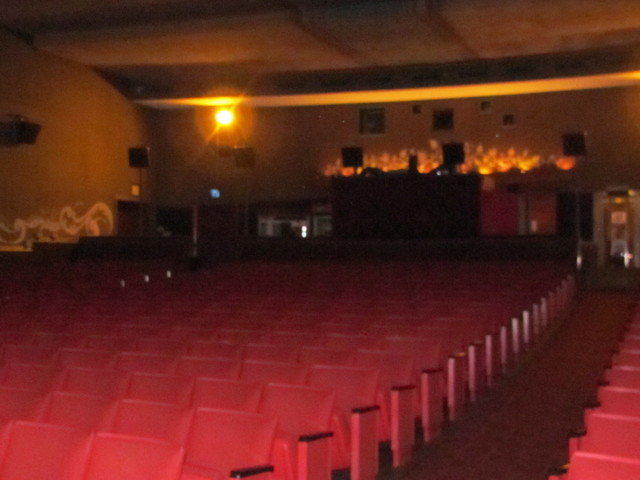 The West Shore Theatre is a classic single screen Streamlined Moderne style theatre in the heart of downtown New Cumberland. It is named the West Shore because it is on the west shore of the Susquehanna River, across from Harrisburg.

The West Shore Theatre opened on January 20, 1940 with the movie “The Secret Life of Dr Kildare” and admission of 25 cents for adults, 15 cents for children. The theatre was designed by Philadelphia architect William H. Lee in an Art Moderne style. Interior wall coverings were in an old rose shade. The auditorium was furnished with walnut panelling on the side and rear walls and the ceiling had a hand painted oil painting. The theatre was built with air conditioning.

As of this writing (2008), the theatre has 450 seats, a large movie screen, EX Surround Sound, 50 varieties of candy at its concession stand and inexpensive admission prices. It was equipped with digital projection in 2014.

We certainly hope this theatre remains a part of the community!

According to Rent Track (nightly film gross reporting site for commercial theatres) the West Shore has been listed as “Closed” since February 2015. From that time forward the West Shore appears to have been running DVDs from Redbox. Wonder if they paid the film companies for use of those DVDs.

Good news for us fans of the West Shore— the phone is back on and they are showing “The Martian” through the week. They aren’t down for the count just yet.

Owner announced that next week is the last. I really thought,once the community helped him raise funds for digital upgrade, it would be safe. So sad to see it go.

As of Wednesday February 14, 2018 the West Shore Theatre is now closed … most likely permanently. The theatre had been operating under bankruptcy protection for the past three years. The finance company which held the commercial paper on its digital projector finally obtained a court order for repossession and removal of the digital projector.

Not good news. This theatre has the original half moon designed glass doors. Please save this cinema treasure by forming a Friends of the West Shore.

IN THE PROCESS OF BEING RESTORED!!!!

Wonderful to know! Keep us posted.