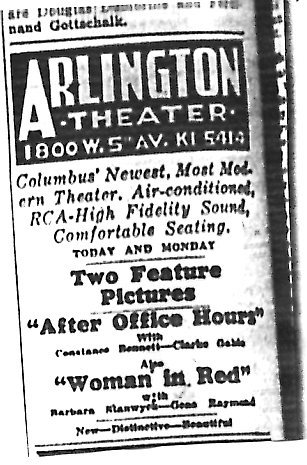 Not to be confused with the Grandview Theatre, this theatre was located at 1800 W. 5th Avenue in Grandview Heights. The Arlington Theatre was the first theatre that the architectural firm F & Y Building Service designed. It was opened on June 1, 1935 for Clarence A. MacDonald. The opening movie was Wallace Beery in “West Point of the Air”.

The building still stands in 2020 with an altered façade as office space.

At http://www.ghmchs.org/thisweek/photo-listing3.htm , there is a picture and this additional information:

“The Arlington Theater was located between Glenn and Wyandotte on Fifth Avenue. It opened in 1935 under the ownership of Clarence MacDonald. It was bought by the Yassenoff Academy Theaters chain, which also owned the Boulevard, the College Cinema on High Street, The Camelot North and the Carousel East in 1944. It closed in 1950 and later housed the Junior Achievement center. There was an unsuccessful effort to reopen it as theater in 1988 and it was modified to house the Horizon Company’s multimedia production operation in the 1990s.”

I remember ads for the College Cinema but never went there. I thought it was west of campus, not on High Street. If you know something about it, can you add it to this site?

By “College Cinema” the article must be referring to the University Theatre across from Ohio State. In the 50’s, the Camelot North was known as the Beechwold and the Carousel East was the Esquire. Academy theatres also owned the Cleve, Southland and Westmont.

There was a College Cinema much later in the Boulevard theatre at Northwest and 5th.

That’s the one I remember with that name, on 5th Avenue.

Can you add the Boulevard, Southland, and Westmont to CinemaTreasures? I do not remember advertising for the last two at all — they must have already been closed by the time I moved to Columbus in 1968.

Is this the building near the Swan Cleaners with what looks to be an old ticket booth out front? Is this really now used as office space… it looked vacant to me…

It’s the fourth building to the east of Swan Cleaners. It IS the one that has what looks like a ticket booth in front. The current user is MediaS0urce (www.mediasourceTV.com)

I’ve been in this building. public access channel 21 looked at it for it’s new TV studio about 10 years ago. just a big open space. still had the projection room. front lobby was like a doctors office check-in space.

An ad for the F & Y Building Service in the Boone County Recorder of October 27, 1938, listed the Arlington Theatre as one of five houses in Columbus that the firm had designed and built by that time. The others were the Westmont, the Fifth Avenue, the Cleve, and the Indianola.