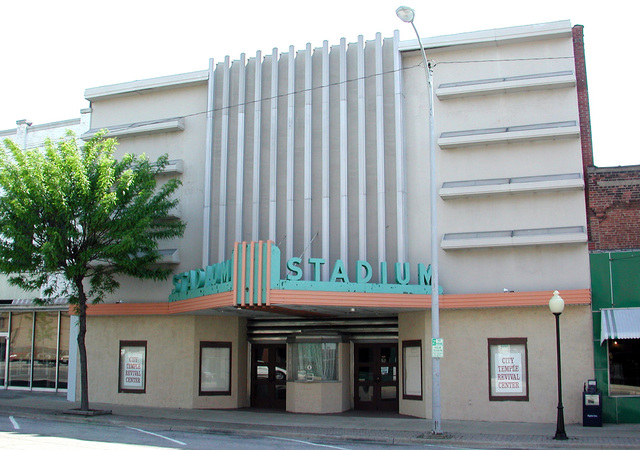 The building apparently has been bought by Randy Farrar, who also bought the bookstore and pool hall next door. He’s renovating the pool hall for an upscale pool hall.

This seems like a cool late deco/streamline design. The church is called the Antioch International Assembly. Mount Vernon seemed to have a big surge following the construction of its large deco/streamline courthouse. The town also has a cool railroad depot I didn’t get a chance to look closely at as well as what appeared to be an older courthouse. Photos of the Stadium are at http://www.flickr.com/photos/tags/ctid3206/

The office of Kansas City architect Samuel W. Bihr, Jr. submitted a questionnaire for the AIA’s Architects Roster in 1953, which included a list of some of his projects. The Stadium Theatre in Mt. Vernon is one of those listed. It was designed in 1946, and cost $150,000 to build. The questionnaire doesn’t give the year of construction, which might have been delayed due to post-war materials shortages, but it’s safe to assume that the theater was opened in the late 1940s.

I just posted a few pictures of the Stadium Theater from my trip through Southern Illinois this past Summer. Here’s a link to them in my Flickr photostream:

This web page has an article about the history of Mount Vernon’s theaters which says that the Majestic/Royal building survived the 1945 fire and was rebuilt as the Stadium Theatre, which opened on May 15, 1947.

The article says that the Stadium was twinned in 1985. It also gives the impression, though does not explicitly say, that both the Granada and Stadium were still in operation at the time the article was written in 1995, though a new eight-screen house which would replace them was under construction on the outskirts of Mount Vernon at that time.

The Stadium is wider than the old Majestic. There were one story buildings on both sides of the Majestic, so the new building was expanded to the north. Since the Majestic itself is shown as being one story, it was likely almost completely destroyed, although possibly in the first fire, before it became the Royal.