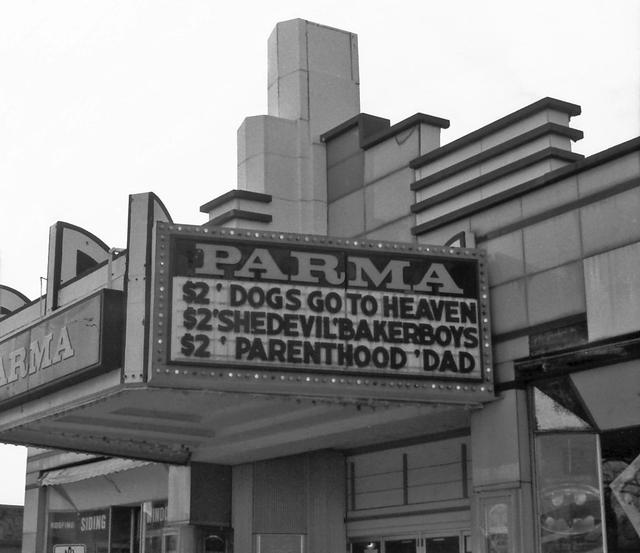 Opened on October 17, 1936 with Joan Crawford in “The Gorgeous Hussy”. This local theatre in the Cleveland suburb of Parma, Ohio was showing second run movies in 2002. By 2009, it was screening first run movies.

The Parma Theatre was closed in September 2012, and the front of the building was damaged by fire in an arson attack on November 16, 2012. The entire building was demolished in December 2014.

According to local radio news reports, the Parma Theatre was flattened today. They also state that the group that was trying to save it was given no notice that it was coming down today.

An article on the demolition in today’s Parma Sun News:

PARMA, Ohio — After the dust cleared Monday, piles of brick, glass and metal littered the Ridge Road spot where the Parma Theater stood for 78 years.

The demolition came with no warning, said Mayor Tim DeGeeter, who learned of the wrecking ball from Councilwoman Deborah Lime, who worked with the Friends of the Parma Theater to try to save it.

“This morning’s demolition came as a surprise to us,” DeGeeter said in a statement. “As this is private property, the city has no standing in this. Our concern is making sure that our residents are safe, that the demolition is done properly and in compliance with city laws.”

The theater closed in 2012, and shortly after, a fire started in the lobby causing $750,000 of damage. The blaze was ruled arson by the Ohio Division of State Fire Marshal and the Ohio Bureau of Criminal Investigation, and the case is still open.

The Friends of Parma Theater tried to save the movie theater from the wrecking ball for nearly two years. Lime said she found out about the demolition from Facebook and phone calls.

“There truly will be a huge void and a loss to the area with the theater gone,” she said and thanked the volunteers who tried to save it.

The efforts to save the theater spanned from impractical, including a resident’s plan to buy the theater for $1 and convert it into a cat sanctuary, to fundraising to turn it into a community arts center.

Owner Norman Barr had to fix 20 building code violations or tear the theater down before Dec. 11 court date.

Demolition crews started around 8 a.m. By mid-afternoon the front of the theater was a pile of debris.

“As a resident of Polish Village and Parma I am deeply saddened and dismayed that the owners have chosen to demolish the building,” said Kathy Mabin, a member of the Friends of Parma Theater.

Mabin said Barr gave the Friends an inflated price and unreasonable time limit, only after the theater was the subject of news coverage.

“So now the community will suffer, gone is the history, gone is the hope to reclaim the building and make the space useful, and what is left behind is a gaping hole left by their destruction,” she said.

Parma resident Wayne Mesker, one of the original members of Friends of Parma Theater, came to watch the theater where he saw “Transformers” and “Spider Man” come down.

The city has done whatever it has to do to allow a CVS Drug Store to be built on the site of the Parma Theatre.

The Parma residents are ecstatic – after all, no CVS here would mean people would have to continue traveling a half mile north to Walgreens or RiteAid, or 1.5 mi. to the south to visit Walmart, Target or Marc’s – oh! the drudgery!
/sarc

Just past by the theater and it is nothing but an empty field.

The CVS is currently under construction, steel framework is already in place.

The Cleveland Landmarks Commission attributes the design of the Parma Theatre to architect Paul Matzinger of Matzinger & Grosel.