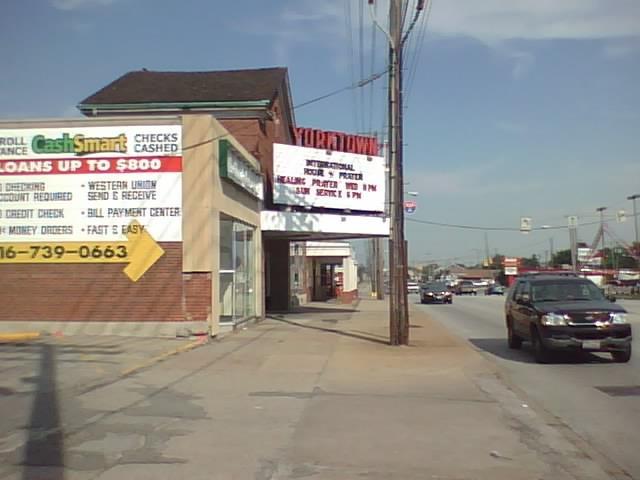 The Yorktown Theatre was a neighborhood theatre that was on Cleveland’s West Side, by the Cleveland/Parma border. It opened in 1947, and was twinned in 1974.

The theatre closed in 1996-1997, and is currently a church, the International House Of Prayer.

I was snooping around the formerly beautiful Loew’s Yorktown 1&2 today, and discovered the following: The International House of Prayer seems to be confined to the lobby area. The main entrance doors are covered over with paper, but on one the paper had fallen off and you could see there has been a wall built across inside, thereby sealing those doors. The entry is on the west side of the building. The former auditorium houses an enterprise known as Yorktown Surplus. It is basically a junk store, selling items salvaged from buildings that were being demolished such as store fixtures, old computers, cash registers AND, lo and behold, the projection automation units and popcorn warmers from the Westgate Mall Cinema. Near the entry to the place remnants of the dividing wall, which was mostly removed, can be seen. Above that are the projection portholes. The original plaster ceiling of the auditorium is still there, though in the former stage area it has been removed, and the roof structure is visible. Also in the stage area are stairs going into a basement below the new flat floor, but I don’t know how extensive the basement is. The walls are stripped down to the bricks. The church was locked so I couldn’t see how that looks, but from what I did see the place is an overall mess.

The church site is www.ihopcleveland.org They must get a lot of hits from people looking for pancakes.

Opened in 1947 by the Vermes Brothers, the Yorktown Theatre was one of numerous theaters designed by Cleveland architect George Ebeling.

Here is a different look at the marquee:
http://tinyurl.com/ygt9dmt

Interesting photos of the LOEWS YORKTOWN.

I was in this theater once before it was twinned and it seemed much larger than 600 seats. More in the thousand range. It seemed quite large to me. I imagine the twinning created 2 long tunnel type theaters similar to Loew’s East and West. I remember it being a nice theater.

Should be listed as AKA as LoewsYorktown.

Yorktown Theater closed in 1996/1997, not 1994. In 1994, it stopped showing new movies and became sort of a Parma/Detroit Theater clone…but it was still a movie theater. I know this because in 1996, they showed at Yorktown Disney’s Oliver and Company when Disney re-released it.