The Promenade,
Bridlington, YO15 2QE 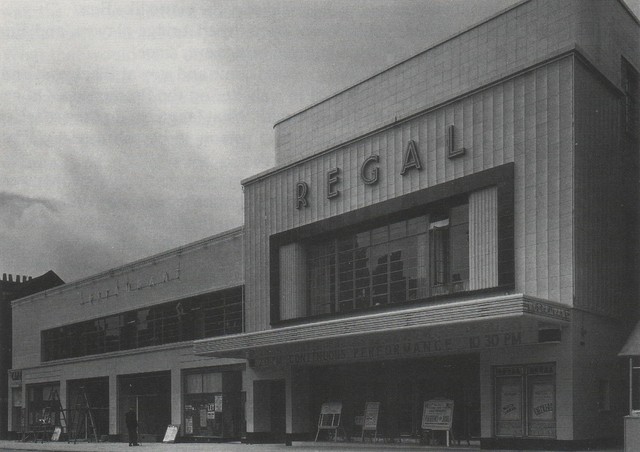 The Regal Cinema in Bridlington, is identical to the Regal Cinema in Walton on Thames. Both were designed by architect C. Edmund Wilford for the Lou Morris chain, and the Regal Cinema, Bridlington opened on July 28, 1938. Seating was provided for 1,355 with 916 in the stalls and 439 in the circle. It was a handsome building equipped with a large café area at 1st floor level above a parade of shops, and a stage 43 feet deep behind the proscenium arch of the same width. There were 4 dressing rooms. A ballroom and a Compton 3Manual/6Rank organ which was opened by organist Florence de Yong were also contained in the building.

The lavish plasterwork screens either side of the stage on the splay walls were designed by the famous company of Mollo & Egan (Alexander Bilimin is credited with the work). A large decorated band ran from rear circle to screen containing the main light source.

However just a few months after opening, the Regal Cinema was sold to the Mayfair circuit. In 1943 the whole of the Mayfair Circuit was taken over by Associated British Cinemas(ABC) who retained the Regal Cinema. In 1955 the stage was brought into use when Ray Ellington & His Orchestra played for a week from 25th July 1955 and Eddie Calvert (the Man with the Golden Trumpet) played for a week from 22nd August 1955. Singer Ronnie Hilton played for a week from 20th August 1956. Singer Alma Cogan had a weeks engagement from July 22, 1957 and singer Lita Rosa played for a week from 12th August 1957. A mini-bowl operated in part of the building from 1962 to 1968. The cinema was re-named ABC in February 1964. On 1st July 1969 it was sold to the Leeds based Star Cinemas chain who operated it as a bingo hall in the stalls and stage areas and a cinema in the circle. The Compton organ was removed at this time.

The Regal Cinema closed Christmas Eve 1971 and the auditorium was exclusively used for bingo as a Gala Bingo Club. It became a Buzz Bingo Club in June 2018 and was closed on 21st March 2020 due to the Covid-19 Pandemic. On 15th July 2020 it was announced the closure would be permanent. A snooker hall operates separately in the café/ballroom space.

In October 2021 an independent operator re-opened the bingo club and it was renamed Regal Bingo Club.

i used to visit bridlington for the family holiday with my parents and remember the regal as a super cinema with thick carpets, i think on the other side of the street was a cinema called the lounge with a entrance facing the regal and another on the promanade

Another photo taken in September 2008 here:–

Some interior shots of the Regal as the Gala Bingo Club, taken in August 2010:–

An independent has taken over the bingo club, it’s really-opened under the Regal Bingo name once more.