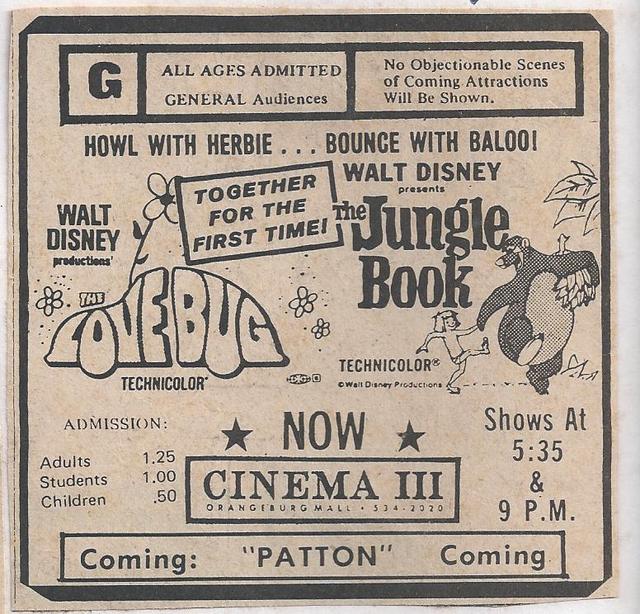 The theater is located in the Orangeburg Mall. The Cinema III was opened 1969 and depite its name it was a single screen theatre with 550 seats. While originally a Carmike theater, the lack of advertisement and information leads me to believe that it is now independently operated. In the summer of 1976 a second screen was added when it was operated by Martin Theatres. Eventually it became a three sceen theatre.

This theater opened as the Cinema III in 1969, and was originally built for a small circuit called Winyah Bay Theatres. The target date for opening was July 1, according to an item in Boxoffice of March 17, 1969.

The 550-seat house was a deluxe single-screener, despite the name Cinema III. The company also operated a Cinema I and the Sumter Theatre in Sumter and the Astro Theatre in Greenville. With the exception of the older Sumter Theatre, all these houses were designed by architects Hiller & Associates. The Cinema III was equipped with an Ultra-Vision screen and 70mm projection.

Boxoffice of July 12, 1976, said that a second auditorium would be added to the Cinema III in Orangeburg. At that time the house was being operated by Martin Theatres. I’ve been unable to discover when the third screen was added, or whether it was in another new auditorium or if one of the first two auditoriums was split.

Thanks Joe, you answered my Question.Cinema III, one screen makes alot of sense.

The original single screen was split in the 70s, and the third screen was in a brand new auditorium added on to the existing building. Before the addition of the third screen, the theater was called the “Cinema Twin,” but that may have just been the name bestowed upon it by the locals! I don’t remember what it was called before the initial split. Whereas the theater is still used today, sadly it is not for showing movies anymore. It is used for events and parties and bridal showers, etc. All of the theater equipment was removed prior to the beginning of the party business, but who knows? If one were to look deeper in the back rooms and closets and old hiding spaces of the place, there may be some old cinema relics left! :)

This opened on June 25th, 1969. Two cinemas on May 12th, 1977 and three cinemas on December 7th, 1984. Closed in 1999 when everyone was going to the megaplex cinemas in Columbia instead. Three grand opening ads in the photo section.