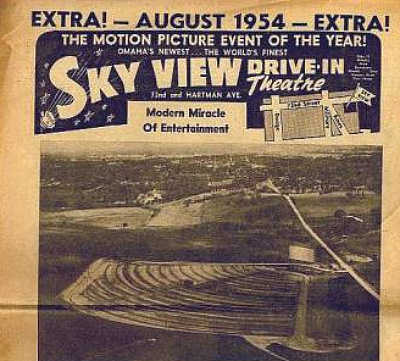 The Sky View Drive-In was opened in August 1954, and at that time was operated by Benson Drive-In’s Corporation, with Ralph Blank as president, and William Miskell. It had a capacity for 1,122 cars and there were 100 seats on top of the concession building for walk-in patrons. It was closed in the late-1980’s

On Sky View’s opening night in 1954, nearly 7,000 people in more than 1,100 cars geared up for the flicks. It even stayed popular into the colder months. Thanks to those in-car electric heaters at no extra charge.

Often on weekends the line of cars waiting to get in would exceed the length of the access road and back up traffic on northbound 72nd street. However, most of this traffic was just going to the drive-in anyway. My family and I were some of the last customers at this drive-in in the late ‘80s, probably 87 or 88. We were there to see Transformers (the feature length cartoon). About halfway through the movie, the projector broke down or something and we all had to leave early. Just weeks later we drove by and noticed it was shut down. Today, it is the only one in the Omaha Metro Area in which the land still sits and has not been redeveloped. Apparently, it was reopened in the mid-nineties, not as a drive-in but as a driving range for golfers.

My Sister use to work at Sky View

In the 70’s my parents took me to the drive in every Saturday night. Sometimes the Golden Spike, some times 76th & dodge but more often than not we went to Sky View. Some of the movies caught my attention but mostly they had the best play ground. My Brother and I would play on the little merry go round and the swings. After it got dark we would still run around the play ground or go to the seating area on top of the concession stand that had ample seating and speakers to watch the movie. Any of you who went there during that time likely seen us, my dad always took his Winnebago and parked near the back so he didn’t block other people’s way. That way we also had a place to crash since we often didn’t leave until after 2:00AM.

This site does not have broadcasting towers. The towers are across the street. There are four towers. Three of them were installed in a vertical line in 1966. One was installed in 1989. The center tower of the first three collapsed at night on 04 July, 2003; they were in the process of adding HD antenna equipment at that time. A new tower was installed just east of it.

Is there anything on the drive-in site now?

The last business there is a golf ball driving range. Since I don’t golf, I only can assume it is still open.

The April 3, 1961 issue of Boxoffice had a note from Sky View manager Jim Schlatter about staying open “all this past winter”. Schlatter said that even with a small crew, his concession did better on several winter nights than on nights the summer before.