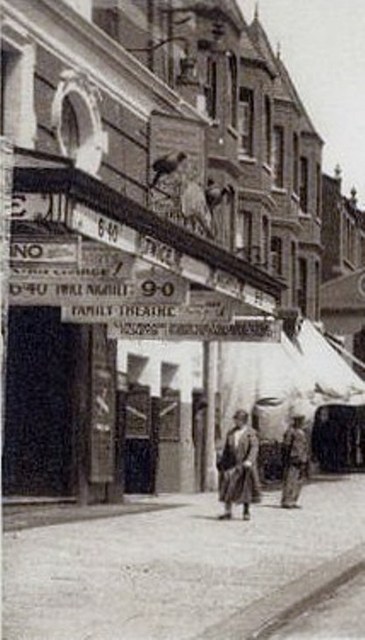 Located in the east London district of Walthamstow, on the north side of High Street, to the east of Erskine Road. The Palace Theatre was opened on 28th December 1903 with Fred Karno’s Company in "Jail Birds". The theatre was operated and built by the same company as the Palace theatre’s at Tottenham, Chelsea and East Ham, and was designed by the same architects. The building had twin towers on each end of its facade, which was built in red brick and Bath stone, designed in an English Renaissance style. The auditorium had seating provided for 267 in the stalls, 390 in the pit-stalls, 352 in the dress circle, 600 in the gallery and two boxes (one above each other) on each side of the proscenium which seated a total of 16 in all four boxes. The proscenium was 30 feet wide, the stage was 25 feet deep and there were eight dressing rooms.

The Palace Theatre was Walthamstow’s music hall/variety theatre, and was very succesful. It was equipped with a bioscope box, and screened film as part of the programme from the early years. Many famous artistes played the Palace Theatre, including: Harry Lauder, Marie Lloyd, Eugene Stratton, Gus Elen, Harry Champion G.H. Elliot, Gertie Gitana, Vic Oliver, Issy Bonn, Gyspsy Rose Lee etc. The Palace Theatre also staged plays including "Love on the Dole" and Todd Slaughter appeared in productions of "Sweeney Todd" and "Maria Martin – The Murder in the Red Barn".

It was operated by Variety Theatres Consolidated Ltd. and in later years, popular variety shows, were varied with engagements by Joe Loss and His Orchestra and Billy Cotton and His Band. There were weeks of circus, more plays, annual pantomimes and even nude shows.

The building was maintained for several months, but was then left abandoned and it fell into a derelict condition. It was demolished in 1960, and a parade of shops and residential units known as Palace Parade was built on the site. The actual theatre entrance would be where the current Peacocks & Madina Supermarket are located at 5 & 6 Palace Parade.

A picture of the Palace Theatre, Walthamstow can be seen here.

In 1969, I was in Honey Lane Hospital. There was a little old lady in the next room. Her lady was Lily Foster. She looked (as an 80 year old) like she hadn’t changed a thing about her appearance since the ‘20’s (high curved eyebrows and kiss curl fringe framing face. She told me she used to sing in various theatres round the world and had appeared at the Palace Theatre. She had gorgeous gowns in her wardrobes. Sadly I neglected to ask if she had a stage name. We remained pen pals for a number of years till she passed away. I have always associated her with that theatre since. I wonder if anyone knows of her, -slim chance, I know.