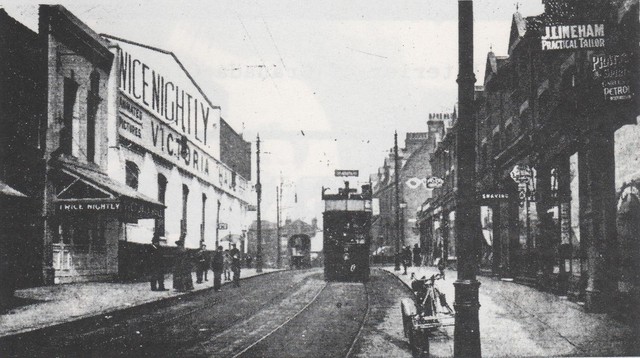 Located in the east London district of Walthamstow. The Victoria Hall opened on 2nd May 1887. It was used for dances and concerts. There was seating for 800 in the stalls and 200 in the balcony.

After alterations in 1896, it began use as a live theatre. Further alterations were made in 1899 and it was re-named King’s Theatre.

From 1907, it reverated back to the name Victoria Hall, and films were being screened. It was re-modeled again in 1921, and re-opened as the Victoria Picture Theatre on 2nd September 1921. In March 1930, it was purchased by Sydney Bernstein, and was immediately demolished.

The second of Sydney Bernstein’s chain of Granada Theatres was built on the site. This is still in situ today as the closed/unused EMD Cinema which is a Grade II* Listed building.

This page has pictures and history of the Victoria Hall/Victoria Picture Theatre.