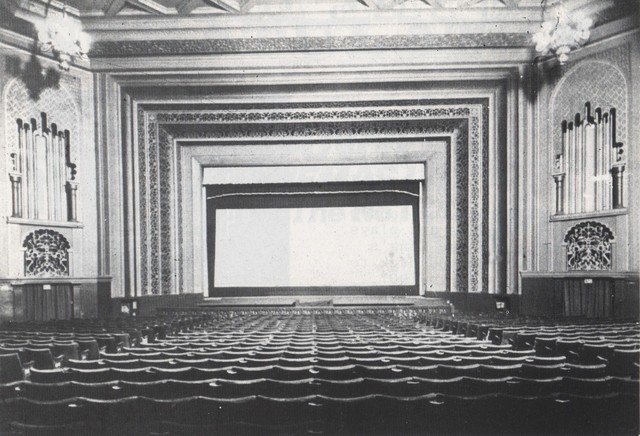 Located in the northeast London district of Walthamstow. Originally on this site had stood the Victoria Picture Theatre, which was purchased by Sydney Bernstein in 1928. The Granada Theatre was the second purpose built Granada Theatre to be built and opened in the expanding Granada Theatres chain (the Granada Theatre, Dover was the first). The Granada Theatre, Walthamstow opened on 15th September 1930 with Sydney Howard in “Splinters” on the screen and Barber & His Band on the stage. Designed by Cecil Masey in a Spanish Moorish style, the cinema had a restaurant, located to the left of the entrance over shop units. The interior design was by Russian theatre set designer Theodore Komisarjevsky, who went on to design the interiors of many more Granada cinemas. The large main foyer is in a Spanish Baroque style with huge mirrors on the walls, and furniture designed especially for the theatre by Komisarjevsky.

In the auditorium seating was provided for 2,697 in stalls and circle levels. There is a large fully equipped stage, but no fly tower. The Granada Theatre was equipped with a 12 ranks Christie organ, which had a rare combination of two 3 manual consoles, one in the orchestra pit and another on the stage level which was opened by ‘Mr. & Miss Smith’, aka organists Charles Willis and Josie Bradley. The stage was put to use many times and on 11th September 1949 America’s sensational singing team The Inkspots performed on stage. In the 1950’s and 1960’s Pantomime’s were staged at Christmas. One night pop shows became popular: Buddy Holly in 1958, Roy Orbison appeared in Autumn of 1963 and again on 19th April 1964 supported by Freddie and the Dreamers. The Rolling Stones were another top act to play here. The Dave Clark Five appeared on 10th May 1964 supported by The Hollies, Mark Wynter, The Mojos and The Kinks. The Beatles appeared on the stage in October 1964. On 7th May 1968 Gene Pitney, Status Quo & Amen Corner appeared on the same bill. On 11th May 1968 Johnny Cash & Carl Perkins appeared on the same bill. Other big name stars who have appeared here include: Dusty Springfield, The Who, Chuck Berry & Cilla Black. It was while setting up for a concert by the Duke Ellington Band, that the orchestra pit was covered over to extend the stage depth, encasing the orchestra pit console of the Christie organ, leaving only the on-stage console playable.

In October 1973, the Granada Theatre was tripled, with 944 seats in the former balcony, using the original projection box and proscenium and boxing-in the two side seating blocks in the rear of the balcony. The two mini-cinemas in the rear stalls under the circle each seated 182 and had a new projection box installed. The front stalls area became unused, with seating removed. The Granada Theatre was given a Grade II Listing by English Heritage on 24th February 1987.

In January 1989, it was taken over by the Cannon Group and re-named Cannon. By July 1995, the Virgin Group had taken over and it was re-branded again. ABC took over from 3rd May 1996, and it was re-named ABC. In around 2000, the ABC chain was taken over by Odeon Theatres Ltd, and although it retained the ABC name, it was soon closed by Odeon. They put a stipulation on any sale of the building, that it could never screen English language films again.

The cinema was purchased by an independent operator, and it was re-named EMD Cinema, screening East Indian (Bollywood) films. After a court battle, he gained permission to screen regular films again, and the EMD was once again a popular cinema in Walthamstow. It closed as the EMD Cinema in January 2003 with the film “The Smallest Show On Earth” starring Peter Sellers, plus a final concert on the stage console of the Christie organ, and a live variety show.

It had been sold (at a price that was too good to refuse) to a dubious quasi-religious organisation the United Church of the Kingdom of God (UCKG) who are based in Brazil. They planned to convert the building into church use and a ‘help centre’. This use was refused by the local council and their decision was backed up by a Public Inquiry that stated the building must be retained in cinema use for the local community. The ‘church’ appealed again and were refused a second time. Several cinema chains have been interested in re-opening the building, but the ‘church’ hiked the asking price, and they were deterred. The former cinema restaurant, which has its own separate street entrance, continued its use as a pub named The Victoria, which was established many years ago. The main body of the building remained boarded up, but initially was not made secure enough, and within weeks of closing there was an illegal ‘rave held inside, then squatters took over causing some damage. In the extremely bitter-cold Winter of early-2011, water pipes burst, flooding the front stalls area.

UCKG were then set a date in November 2011, to decide what to do with the building, and after the deadline had passed, they decided to apply again and take the case to a second Public Inquiry, which was due to take place in summer of 2012. This was cancelled when UCKG applied for use as a ‘community centre’. Again, this use was refused and by autumn 2012, UCKG appealed the refusal. The second Public Inquiry went ahead, and again UCKG were refused permission to use the building. In June 2013, UCKG decided not to appeal the second Public Inquiry. A decision on future use for the building then rested with Waltham Forrest council and a deal being struck with UCKG! However, on 4th November 2014, in a surprise move, the ‘church’ sold the building to the Antic pub group. It was hoped that they would liaise with other parties who wish to see the building re-opened as an entertainment use venue. On 10th December 2015 the foyer was opened as a ‘pop-up’ pub.

The pub was re-named Mirth and has become a popular venue. On 31st October 2016, screen 2 (one of the former rear stalls mini’s) opened for a presentation by Stow Film Lounge of Mel Brooks “Young Frankenstein”, the first film to be shown in the cinema for over 13 years. This was followed on November 13 with “A Matter of Life and Death”(1946). In the meantime, the main auditorium sits vacant, awaiting restoration to begin.

On 12th March 2018 it was announced that Waltham Forest Council planned to purchase the former Granada Theatre from EMD Walthamstow LLP for £2.6million. The sale went through in March 2019 and it is planned that restoration & refurbishment of the building will commence in 2020, with a completion planned for late-2022. It will be a full restoration to its original condition, including the Victoria bar (former restaurant), and it is hoped the twin console Christie organ will be repaired and renovated. The decorative top of the façade, removed many years ago, will be reinstated. Seating in the auditorium will be reduced to 1,000, and will be leased by the Soho Theatre Company as a live theatre attracting major stars, comedy performances, Pantomime and occasional films. The Mirth bar in the foyer was closed on 5th January 2020 to enable restoration work on the building to commence. The Victoria pub, a gay bar in the former cinema restaurant remained open until it was vacated by August 2020 and restoration of the building began.

According to this blog item, the theater has suffered significant deterioration and damage caused by some squatters that temporarily occupied the theater and from neglect on the part of the church that owns the property. The blog has links to some videos about the theater that include some historical photos as well as one of the flooded main auditorium:
View link

The cinema’s owners UCKG had their 2nd application to convert the building into a church (with some community access) REJECTED unanimously by Waltham Forest Council on 18 May 2011. The church plans to appeal, as they did for their original application in 2003.

Meanwhile a charitable building preservation trust called Waltham Forest Cinema Trust' has been established to buy and restore the building as a full time cinema and live events venue.

This photo of the auditorium of the Granada Theatre was published in the November 1, 1930, issue of the American trade journal Motion Picture News. It was one of several photos illustrating an article on Spanish and Moorish architecture that begins on this page of the magazine, which features another, smaller, photo of the theater.

The Universal Church of the Kingdom of God has now sold Waltham Forest’s EMD (formerly Granada) Cinema site, including the adjacent pub (formerly the cinema cafe) and shops, to the Antic Pub Collective as of May 2015. It remains to be seen whether the building will reopen as a cinema, especially with a 9-screen multiplex having recently opened next door. One can hope though!

the Christie organ is still in the building but needsots of work before it will play again.

The Stow Film Lounge are screening Quadrophenia here on 18 May

“Preview peek at how a former music hall will be converted” : The press never get anything right – at least where cinemas are concerned…….

By the end of August 2020, all tenents in the buiding had vacated and restoration began in earnest. For the first time in half a century the Pit console of the Christie organ was raised – and was in a very sorry state, having been left to rot, and submerged in the 2011 flood. The stage console is in only slightly better condition after nearly two decades of cold, damp and pigeons!