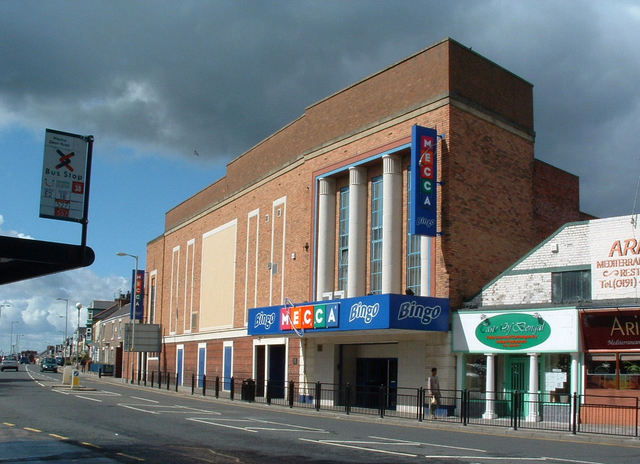 The Regent Cinema was opened on 21st October 1935 with Leslie Howard in "The Scarlet Pimpernel". Described as ‘South Shields’ Super Luxury Cinema', it was built for and operated by the independent chain Thompson’s Enterprises Ltd. of Middlesbrough. It was designed in a Neo-Classical style by architect John Cecil Clavering of architectural firm J.H. Morton & Son.

The Regent Cinema had a fully equipped stage, with fly tower, which was put to good use over the years. It was closed on 15th July 1966 with Cliff Richard in “Summer Holiday”. It was immediately converted into a Mecca Bingo Club, which closed on 14th September 2014.

A night view of the former Regent Cinema in August 1997:
View link

Thanks for the photo Ken Roe.

Go in every Tuesday for bingo.they have disconnected alllights in circle.and not doing any maintenance.leak in roof if not fixed dampness in circle walls and timer mailed to ceiling to stop ceiling collapsing greedy when they make good Profit but let old clubs which made them rich die

This was the last cinema built in South Shields before WWII. Unlike most UK cinemas it had a box-office that opened directly onto the pavement between the main entrance doors. It also had an unusual diamond-shaped auditorium. It was regularly used by the local operatic society as a theatre until the bingo management made alterations that made further theatrical use impossible. It used to have split weeks with two different programmes each week. The house lights were not on a dimmer. There were two sets of neon tubes in the ceiling, one red and one white. When the performance was due to start the white lights went out followed by the red ones. The red ones came on at the end of the performance followed by the white ones. It looked very slick. It was a very pleasant venue in which to watch a film programme.

1964 photo uploaded of this, the largest of South Shields' cinemas, showing ‘The Fall of the Roman Empire’ in 1964