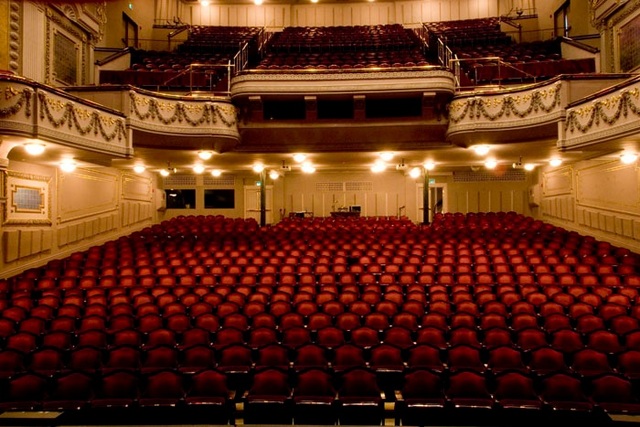 Built in 1923 it opened as the Capitol Theatre, and has been exquisitely restored to state-of-the-art theatrical capability.

The Wasatch Front is the center of Utah’s population, spanning about 150 miles from Payson on the south to Logan on the north. Logan’s Ellen Eccles Theater is a magnificent restoration, but still without a voice. A Mighty Wurlitzer donated by a Californian is being prepared for installation where the original theatre organ sat, a unique under-stage location reminicent of Bayroit. Preparation of the original organ’s space, and installation of the organ awaits the go-ahead of the Eccles family members who own the theater. When it is in place, the organ will give Logan the same thrilling addition to the arts that its neighboring Wasatch Front community, Ogden, is now enjoying. Ogden’s Peery’s Egyptian Theater’s newly installed Mighty Wurlitzer completed a monumental restoration of the theater, making it a national treasure. The Ellen Eccles theater pipe organ and its art forms will be welcomed into the unusual newly awakened phenomenon, an exciting renaissance of theatre organ art forms. This resurgence of popularity started with the annual silent film series, with live accompaniment on its huge 5-manual, 36-rank Wurlitzer. The large following at Salt Lake City’s Organ Loft sparked a reawakening of the Mighty Wurlitzer uptown in the Capitol Theater. Its long silent original Mighty Wurlitzer now presents a pre-show event that introduces the theater organ to busloads of students attending Ballet West’s Outreach to Schools performances. The Egyptian Theater’s voice greets patrons finding their seats and bidding them farewell after the movie or stage show, and enthrals them with the live accompanied silent film art form. A formal academic course called the Silent Movie Accompanist Center for the Performing Arts now teaches orgnists this art form to musicians who are motivated by opportunities to perform it for paying audiences in working theaters. When the Ellen Eccles Theater adds its voice, its Mighty Wurlitzer will make a total of four instruments, each along side a State University, forming a Mecca for the Unit Orchestra art forms. Famous touring artists are already on to Utah’s phenomenon, and are amazed by Utah audiences. Jelani Eddington and Rob Richards both said they haven’t experienced such enthusiasm. Every fine theater should be so lucky! Ogden’s Egyptian Theater marque displays the phrase: Arts build Community and Community builds Arts. We have solid proof, beyond all doubt, that the music of these Unit Orchstras are influencing more morality and less mayhem in our communities. Every community should be so lucky!

I am Wally Bloss, the Executive Director of the Cache Valley Center for the Arts, which operates and manages the Ellen Eccles Theatre for its owner, the City of Logan, UT. My purpose is to expand and correct some of the information contained above.

In 1912, when the 800-seat Thatcher Opera House was destroyed by fire, George and Brigham Thatcher envisioned an ornate, first-class theatre to replace it.

The theatre they envisioned became reality later when the new Capitol Theatre opened on March 23, 1923. At the hefty price of $250,000, the beautiful new theatre boasted a fly system, excellent acoustics, and an opulent interior. Named for its rival in Salt Lake City, the Capitol Theatre contributed to the image of Logan as â€œthe Athens of Utahâ€ and for the next few decades it was at the heart of cultural activities in Cache Valley.

The beautiful structure was grand enough to attract the great entertainers: Abbot and Costello, John Philip Sousa, the Marx Brothers, and George Burns and Gracie Allen. Live performances shared the stage with films, which became dominant through the 1930s. Thousands of avid moviegoers flocked to the theatre until television emerged in the 1950s. The crowds waned and films shared the space with community productions.

By the 1980s, the Capitol Theatre had suffered from years of neglect. The ornate plasterwork had been painted industrial green, burlap sacks covered the stunning murals portraying the mythical phoenix bird, and a massive plywood wall blocked the stage. Some spoke of demolishing the building to provide additional parking. A few visionary citizens united the community in an ambitious $6.5 million project to restore the theatre and create the adjacent Bullen Center for other arts disciplines, and the co-located Thatcher-Young Mansion. As a result of this grass roots effort, the building was transferred to the City of Logan. A non-profit 501c3 organization the Capital Arts Association was created, later re-named the Cache Valley Center for the Arts, to manage and operate the theatre, under an agreement with the City of Logan. On Jan. 8, 1993, the Capitol Theatre was reopened and renamed the Ellen Eccles Theatre in honor of early Logan resident and philanthropist Ellen Stoddard Eccles. It is not owned by the Eccles family, although they certainly support it.

The Board of Trustees of the Cache Valley Center for the Arts employ a professional staff to operate, manage, and maintain the facility with funds from the City of Logan, Cache County, ticket sales, rentals, philanthropy etc. There is no plan to remodel the theatre to accommodate an organ, in fact after an architectural study it was determined to be extremely costly, and would compromise the existing improvements to the stage, and thus the idea was laid to rest.

The Utah Festival Opera Company is a partner in residence for the summer as it rents the theatre to present its excellent series of four operas in repertory. Several other local organizations also rent the theatre during traditional season, and the Ellen Eccles Theatre Presents season encompasses 14 to 15 touring productions, usually for two nights. The correct website for the facility is www.CenterForTheArts.us

Micheal Ballam is the treasure of the theater.His talent is know to few nationally,but he is a world-class opera and musical wonder.People come from far and wide when he is onstage.

EET is a true gem. Comparing the EET restoration to the “restoration” of the Capitol Theater in Salt Lake City only highlights the workmanship and attention to detail that Logan received. What a treat to be able to see a production in that palace.

This Floridian attended a performance of THE PIRATES OF PENZANCE last week at the EET. What a beautiful theatre this is, and the performance was awesome. Logan should be very proud of this venue.