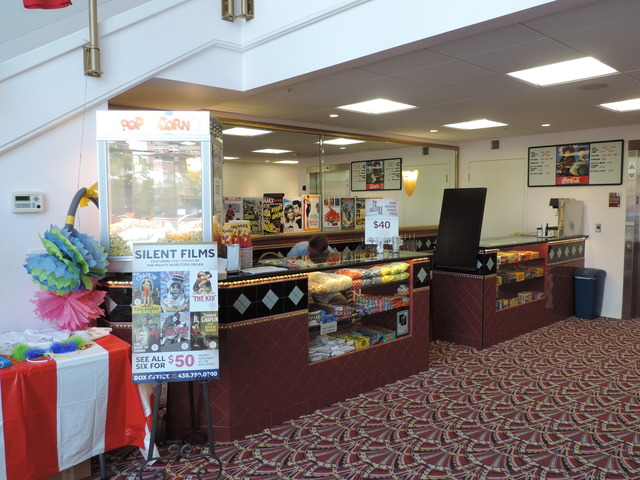 The Utah Theatre is very well preserved, and is a wonderful little theatre to visit. The colorful marquee is kept in perfect condition and the original ticket box is still in use as well as the original concession area.

The lobby is quite shallow. The theatre does have a balcony that is always open. In the booth is a Simplex X-L projector with Ultra Stereo Processor and DTS 6D Digital playback processor.

In 2005, the Utah Theatre ceased being a first run movie theatre and was used for live performances, with ocassional classic films screened. It was closed in late-2007 for renovation work to be carried out. It reopened in the fall of 2011.

Big news here.Theater shut down recently.Now owned by the great Ballam’s Utah festival Opera Company.Stage will be expanded,a million dollar wurlitzer will be installed.A wide variety of live entetainment is projected,plus silent movies.Along with the other two theater,a yearly festival is planned that will make Logan a Mecca for the stage lover.This am’s SL Tribune has a small article on all this.

I was thumbing through the local paper today and there was a big article on the Utah Theatre and its new style of shows. The article is in the “Cache” subsection of the local Herald Journal, dated November 24-30, 2006. It’s entitled “Out with the new, in with the old.” Basically, it reports that director Gary Griffin has started showing OLD films at the theatre — films starring the likes of Jimmy Stewart, Grace Kelly, etc. He says that people are coming out of the woodwork to see the old films, and he’ll continue to show the old flicks as long as people support them. A few of the favorites that have been shown recently are “Gone with the wind,” “It’s a wonderful life,” “Casablance,” and there will be a host of Christmas movies (Miracle on 34th street, for example) shown during the holiday season. Looks like the Utah Theatre is alive and well — even if it means showing reruns. Tyson

Utah media reports,such as on KSL site,indicate that Ballam’s co.needs money badly,as the economy has dried up the normal deep pockets of the Utah finacial elites.Renovation on the Utah has been halted till the coffers start to fill again. How sad for Logan.By the way,the renovation will lower seating to 350.

Some pictures of the renovation & installation of the Mighty Wurlitzer Theatre Organ can be found on Utah Festival Opera’s Facebook page here (these are from Summer ‘09):

There are a couple of pictures that reveal the Art Deco design inside the theatre that had been covered up with fabric during its time as a movie theatre.

The Roxy Theatre opened October 23, 1935 with Alice Faye and George Raft in “Every Night at Eight” supported by selected shorts. After an ownership change a new 20-year lease, the theatre became the Utah Theatre on January 14, 1956 with Victor Mature in “The Last Frontier.”