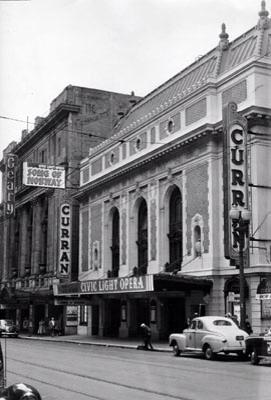 The Curran Theatre opened on September 10, 1922. It was built at a cost of $800,000 by Curran and Schubert Theatres; Alfred Henry Jacobs was the architect.

For eighty uninterrupted years, the Curran Theatre has served San Francisco theater-goers with top of the line legitimate productions, most recently the incredibly long running “Les Miserables” and “Phantom of the Opera”.

On September 3, 1921 it was renamed Century Theater with a screening of “Queen of Sheba” starring Betty Blythe. In 1925, the film version of “Phantom of the Opera”, starring the legendary Lon Chaney was shown at the Curran Theatre.

But what does that matter? The Curran Theatre is a beautifully maintained architectural treasure, still operated according to the highest imagineable standards, a living example of San Francisco’s theatrical and architectural heritage.

Just another thought here, that photo also depicts Geary Street and the Geary Theatre next door to the Curran, now home to American Conservatory Theatre) as two-way (it’s one-way now and has the distinction of having the 38 Geary Municipal Railway bus line, the heaviest-trafficked line in America, by the way; then it had the Muni streetcar lines A and B with service to Golden Gate Park and beyond. San Francisco has the first and oldest, civic-owned transport in America, since 1912.

The theater cashier was shot and killed in a holdup in 1933:

San Francisco Dec. 27 â€" A hanging verdict was returned early this morning against Edward Anderson, 25, confessed slayer of Hewlett Tarr in a theater box office holdup. Anderson insisted throughout the trial that he had not intended to kill Tarr, Curran theater cashier, but through his unfamiliarity with his gun, it accidentally discharged as he pointed it at the cashier through the grillwork of the cashier box office window.

and here are some shots of the neighboring Geary, not on this site but much more interesting exterior
View link

The ghost of the cashier shot in 1933 haunts this theatre as does the spirit of a little girl killed by a car across the street in the 50’s. Information from tv series America’s Scariest Places.

The Curran has only shown 2 films in it’s 95 year history, The Phantom of the Opera mentioned in the overview above, and more recently Fences was screened last month. The Curran had been closed for a year for a lobby renovations and restoration of the auditorium. Here are a couple of articles on it w/pictures:

Curbed Article on the Curran

Reopened as Century on September 3rd, 1921 Grand opening ad in the photo section.

speaking of the film The Queen of Sheba. its one of those classics from the silent era that has been “lost” for decades. but I wonder if its really “lost” or possibly is stored in unmarked cans deep down in the bowels of some film archive.