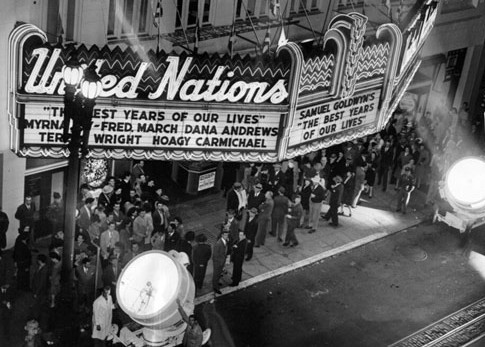 The Alcazar Theatre opened in 1911, and soon became one of San Francisco’s leading legitimate theaters, replacing the previous Alcazar Theatre one block to the East, which was destroyed in the earthquake and fire of April 1906.

With the advent of talkies, and the Depression of the 1930’s, the Alcazar Theatre fell on hard times and became a secondary low-price film outlet.

In 1952 it was renamed the Alcazar Theatre once again, and reverted back to legitimate productions.

It closed on New Years Eve 1961, and was torn down. The Handlery Motor Hotel was soon built on its former site.

The last theatre to be named the Alcazar still stands, but what was used to show films I am not sure. The bottom floor is a parking garage and the doors to the upstairs do not look like they have been opened in years. It is a nice looking building and it is sad it is in the condition it is in.

San Francisco’s one and only atmospheric, the Uptown Theatre, was located on Post at Fillmore, next to the Winter Garden. Several photos listed as the Alcazar on this page are actually those of the Uptown …
Uptown exterior -
View link
Uptown atmospheric auditorium -
View link

Curiously, on CT listings I find no reference to San Franciso’s Uptown

There was an Uptown Theatre on Sutter at Steiner which was once called the New Alcazar, according to the San Francisco Theaters, Cinemas, Dancehalls, after 1906 page. I can’t find anything about an Uptown Theatre at Post and Filmore, though.

I think the recently added Cinema Treasures Uptown Theatre page just got pulled as a duplicate listing of this Alcazar Theatre. In fact I now see that it was the 1907 photo linked there and above on this page by Seymour Cox, and even earlier (January 2005) by Lost Memory which was the duplicate. I think that photo is of the New Alcazar/Republic/Sutter/Uptown, which was on a corner lot. This Alcazar Theatre on O'Farrell Street was on a mid-block lot, as can be seen by the photo provided for this page by frenchjr25.

I’m still not sure about the interior photo Seymour linked to above, but it’s probably the of Uptown.

The question also remains as to which of the two theatres was actually designed by Cunningham & Polito.

The Uptown page can be restored, but with the correct location of Sutter and Steiner, southwest corner.

So where is the UPTOWN page? For information and photos, see page 105 of my book, THEATRES OF SAN FRANCISCO.

This article from last month refers to the Alcazar, but I assume they’re talking about the Uptown, since the Alcazar on this page is long gone.
http://tinyurl.com/5mtrtq

There’s a misspelling in the architectural firm name at top. Harry L. Cunningham’s partner was named Matthew V. Politeo, not Polito as it currently says.

Gotta love that marquee in above picture!

Those were the days. In 1956-57 my brother and I were ushers at the Alcazar Theatre on O’Farrell Street in San Francisco. I was just 16 at the time and got to see a lot of plays including Anniversary Waltz, Whiteness for the Prosecution, Tea House of the August Moon, The Diary of Anne Frank and many more. I knew every line in the play Anniversary Waltz because it ran for almost a year and of course I knew all the actors too including Marjorie Lord and Mary Jane Saunders. Mary Jane was playing the teenage daughter and was really good. I like her a lot and we uses to go behind the box seats and make-out a little until one day she missed her cue and she was late getting on stage. We both got into trouble for that. Great memories…

This opened on May 1st, 1945 as United Nations for those holding conference credentials. It opened to the public on June 27th, 1945. Ads in the photo section.