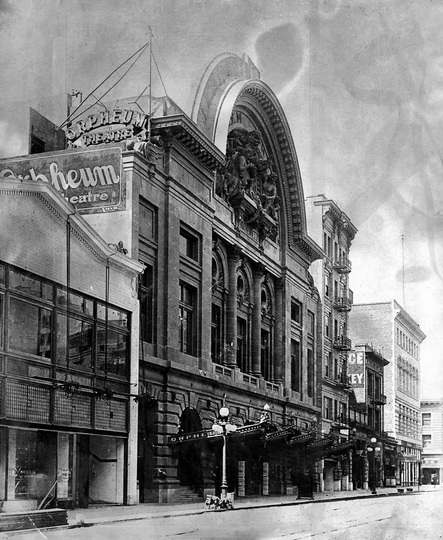 I am researching San Francisco’s long vanished third Orpheum Theatre. Architects Lansburgh & Joseph designed it for the Orpheum & Realty Co. This was a vaudeville theatre which opened on April 19, 1909, replacing the city’s first Orpheum Theatre(1887) that stood on the same spot, and was destroyed by fire in 1906. A second Orpheum Theatre had opened in 1907 on Ellis Street, later known as the Garrick Theatre.

This Orpheum Theatre was the first theatre to be designed by architect G. Albert Lansburgh, together with his former partner Bernard J. Joseph. The Orpheum Theatre remained a vaudeville theatre, but also screened newsreels and short movies on its screen, accompanied by a 2 manual/3 ranks Robert Morton organ, until June 27, 1927, when Ted Lewis & His Band headlined the last show.

It was remodeled, removing a balcony, and much of its decoration, becoming Minski’s Columbia Theatre, presenting burlesque from March 10, 1930. It operated with that name for just one year. It was closed in 1938, being demolished in May 1938, and a parking garage was built on the site.

Looking for pictures and stories for an article I am writing for the Argonaut.

Would love to here stories from people who actually experienced the grand old place.

I’ve found two photos of the third Orpheum at Google Books, both showing only the front. I don’t think either of them are in the San Francisco Public Library’s digital collection.

Page 13 of this 1912 book has a medium-close photo of the Orpheum’s entrance, showing the elaborate detail of the marquee.

Page 22 of this 1912 volume of Architectural Record has a front-on view of the theater’s facade (the caption missnames Lansburgh as Landsberger.)

A 1909 issue of The Architect and Engineer has an article about the Orpheum’s ventilation systems. No pictures, but it provides a rather thorough description of the structure’s “lungs.”

Another 1912 book has a brief biography of Lansburgh, though it only mentions the Orpheum in passing.

The Orpheum is mentioned in quite a few other public domain books that can be read at Google Books (at least in the U.S.– some books are blocked in other countries) but they don’t give many details, and I’ve found no other photos in any of those I’ve looked into.

The Orpheum was designed while Lansburgh was still part of the firm of Lansburgh & Joseph, in partnership with architect Bernard Julius Joseph.

The name Minski is puzzling me. The famous New York City burlesque king was named Minsky. Was some San Franciscan actually named Minski, or was the operator just trying to associate his theatre with Minsky’s in the public mind, while trying to avoid getting sued by the actual Minsky?

The only other place on the Internet I can find the name Minski’s Columbia Theatre is this page (scroll way down to reach the O'Farrell Street section,) which gives a different name history for the house than the one in the description above:[quote]“Orpheum 1909-1929 – designed by G. Albert Lansburgh
Orpheum Theatre
Columbia 1930
Erlanger’s Columbia 1931-1934
Minski’s Columbia 1935
Columbia 1936-1937”[/quote]The page is unsigned, but says “The information on this list was compiled from vertical files in the Art and Music Center of the San Francisco Public Library, city directories, motion picture directories, daily papers, and the very meticulous research of Jack Tillmany.”

Thanks for all the links Joe.

The AMPAS Margaret Herrick Library in Beverly Hills has over fifty images of this theatre, including construction, in its B'hend and Kaufmann Collection. E-mail:

A significant correction is needed to this theatre’s description. It needs to be listed as the ORPHEUM. That was its original name when built, and the moniker it operated under for over twenty years. Its time as the COLUMBIA was a mere 8 years, beginning in 1930. Joe Vogel’s comments and research above do bring up an interesting question about the Minski vs. Minsky spelling.

The name Minski’s should certainly be removed from the title of this theatre’s page, as—according to the history researched by Joe Vogel, the Minski name was only applied to the theatre for one year.