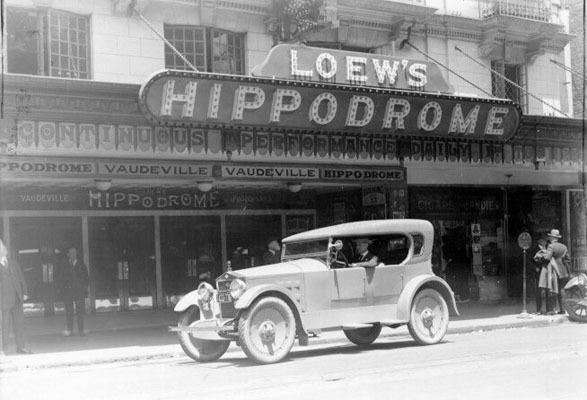 The Filmarte Theatre opened on October 18, 1913 as the Gaiety Theatre with the live musical revue, “The Candy Shop”. It was built by Broncho Billy Anderson. For details about this venture, see David Kiehn’s excellent book, “Broncho Billy and the Essanay Film Company”.

In 1915, Anderson found himself in a financial squeeze and turned the management of the theater over to Ackerman and Harris, who renamed it the Hippodrome Theatre, and it re-opened as such on May 2, 1915 as a vaudeville house.

Ten years later, on February 21, 1925, it was renamed the Union Square Theatre and this time feature motion pictures were its mainstay, supported by vaudeville, at reduced prices. On October 17, 1931, it re-opened once again, this time as the Filmarte Theatre, with bottom priced motion pictures, but the depression had taken its toll on theaters and audiences everywhere, and it was now the end of the line for this one.

and reopened as Filmarte on October 17th, 1931. Grand opening ad in the photo section.