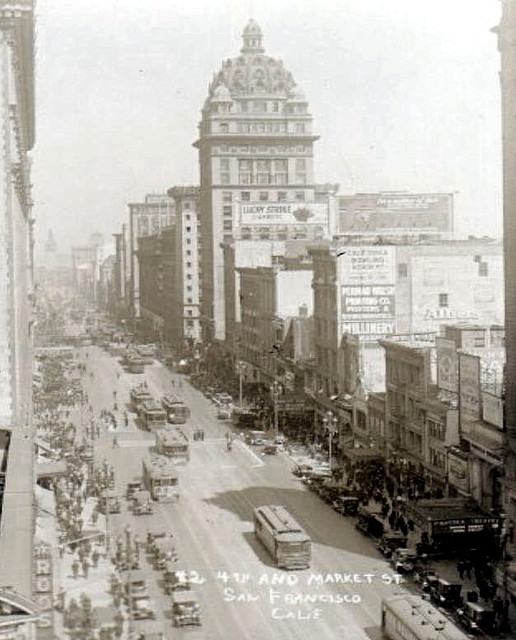 The Portola Theatre opened around September 1909, one of the first larger and more important theatres to be built on Market Street after the devastating fire and earthquake of April 1906. It opened with a seating capacity for 1,100. As films quickly grew in popularity it soon became a popular first run venue. In 1919 it was equipped with a Wurlitzer Style 135 Hope-Jones Unit Orchestra. By 1922 it had been remodeled in an Italian Pompeian villa style after being taken over by lawyer/exhibitor Herbert L. Rothscild and renamed New Portola Theatre. But the larger and grander movie palaces that were being built, particularly the 2,000-seat California/State Theatre opening in 1917 just a few doors away (qv), soon ended the Portola Theatre’s days as a popular venue and it closed in 1928.

The lobby of the building was then converted into a bus station waiting room for Gray Line Tours and so it lasted until 1944.

In 1944 it re-opened once again as a film theatre, catering to the wartime crowds that filled every Market Street theatre night and day. Its policy seemed to be to run just about anything that moved that people were willing to pay fifty cents to watch.

A six week sub-run of “The Outlaw” in early 1947 established its identity as a outlet for anything that was just not quite appropriate for mainstream houses, foreign and domestic. Titles like “Whirlpool of Desire”, “The Widow Misbehaves”, “The Foolish Virgin” and “Wages of Sin” started popping up on its marquee, and the rest, as they say, was history. Exploitation was the name of the game.

On May 1, 1957, its owner, Harry Farros, changed the name to Farros Theatre and it began screening adult movies. On July 2, 1961 it was renamed the Paris Theatre, opening with “Naked in the Deep” & “Young Sinners”. It closed in August 1971, not for lack of business, but as part of the Market Street Redevelopment plan; it was immediately torn down.

I’ve been unable to discover the original architect of the Portola Theatre, but the February 27, 1918, issue of Building and Engineering News said that architect Alfred Henry Jacobs had prepared plans for a $5,000 renovation of the house, to include redecoration, new marble and tile work, and some plumbing.

The Portola Theatre rated several lines in a July 15, 1916, article about San Francisco’s movie theaters in The Moving Picture World:

“The Portola theater on Market street, near Fourth, is one of the most interesting houses in the city. When first opened it was devoted to vaudeville and moving pictures, but has been showing the latter exclusively for several years. Under the able direction of Eugene Roth it was been made a great success with its never varying policy in regard to prices and the selection of attractions. It has a seating capacity of 1,100 and has shown many of the greatest films produced, at ten and twenty cents. So marked has been the success of this house that a company known as the Market Street Realty Company has been formed to erect a moving picture theater at Fourth and Market streets with a seating capacity of about 3,000, this house to be one of the finest in America. This company has taken over the Portola theater, as well as the Market Street theater, two blocks further up the street. This latter house, which has been conducted since its erection by Hallahan & Getz, has a seating capacity of 1,100, so that when the new theater is ready Mr. Roth will have charge of three houses within two blocks, with a total of about 5,200 seats.”

The proposed theater at Market and Fourth opened in November, 1917, as the California Theatre, and was later known as the State Theatre.

Mr Senda’s 2006 comments on the location are slightly off. The Bank of America building to the right of the now gone Paris Theater is the historic Humboldt Bank Building. The Men’s Wearhouse currently occupies the ground floor. The Ross store he mentions is at the southeast corner of 4th and Market and in a building built on the site of the demolished State (California) Theater. Currently a coffee shop sits right where the Paris Theater once stood and to it’s left is Yerba Buena Lane, a pedestrian promenade leading south to Mission St.

This became an adult theatre called Farros on May 1st, 1957. Ad in the usual spot.

The Paris can be seen in the 1969 movie “Eye Of The Cat” with it’s marquee lights on. In the scene, Gayle Hunnicut is driving Michael Sarrazin to a spa for a makeover treatment for her insidious plot. The footage looks like rear end projection with them in the car in front of it (as they did it then). Was it an adult theatre 1n 1969, the print was on a bootleg copy and you can’t decipher the features on the marquee but it is the Paris as the vertical sign “caught my eye” (forgive the pun. The movie is now available on Blu-Ray after 50 years! Universal has to get into thier vaults and start releasing some of thier films from the 1960’s. What’s the matter with Comcast? Even Mary Tyler Moore’s several movies for them remain unreleased, how about a box set??? Comcast needs to sit on a thumbtack!!!! Just kidding boys and girls, America’s classics go down the drain.

Orlando:I have the Blu-Ray of “Eye of the Cat” and have taken a look at that rear projection scene frame by frame. Unfortunately the film titles on the marquee of the Paris Theatre are blurred, and cannot be read, even on a 55" TV screen.