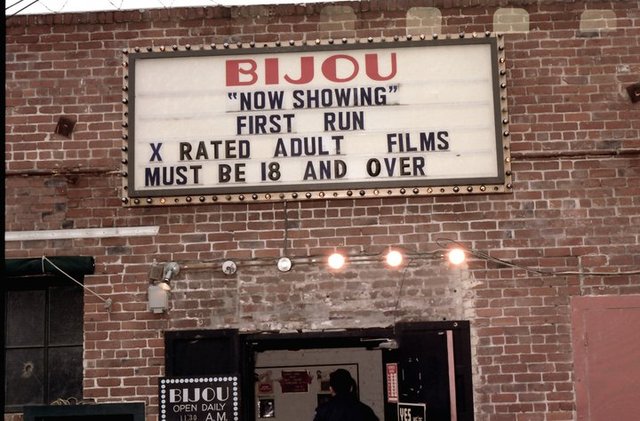 The Bijou Theatre was opened as an independently operated adult cinema in 1974. It was taken over by the Pussycat Theatres chain in 1982, and they operated it until January 1993.

The theatre is now a bar named the Valley Brewing Company.

As chronicled in this week’s new San Diego Reader, with an updated and expanded version of the ongoing Pussycat Theater project – View link

The owners from 1974 to 1982 were Bob and Susan Carson. Walnut Properties, who ran California’s Pussycat Theatre chain, coveted the locale, but was unable to close a purchase deal on the property until 1982.

As with many Pussycats in the chainâ€™s fading days, Walnut ceased day to day operation in the late-80s. New management leased the theater from Walnut, keeping the Pussycat signage and operating the locale as a Pussycat (also like at many other latterday â€˜Cathouses). In this case, a former Walnut employee leased the property and ran it, Walnutâ€™s former district manager of northern California, Mrs. Paula Miranda (no relation to Walnut co-founder Vince Miranda),

Hi theatre fans !!! I am what you should now refer to as the bijou theatre’s very last employee…I workeddd there from 1990 until its last heaving sigh in 94'… and I can tell you that the aforementioned city leaders did not play fairly! They conducted A local business owners meeting and together voted out the Bijou Theatre from the Miracle Mile even though it wasn’t really on The Miracle Mile and after that we started getting vice squad officers into the theater all the time harassing patrons and driving them away eventually we were making almost no money at all and soon enough they raided us and took away our business license, mind you this place was here for 25 years very sad to see it go

Did I mention, the Bijou Theatre management was not allowed to attend or even be invited to the business owners meeting aforementioned??? Coincidentally the very same thing happened to the Oakland pussycat theater also which was also owned in the end by Paula Miranda