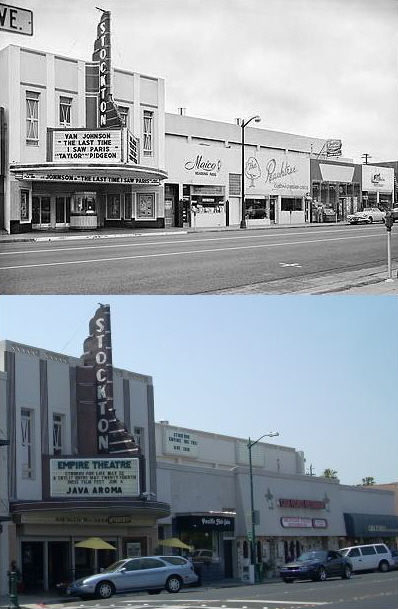 This is a great old Art Deco style theater right on the end of Stockton’s Miracle Mile district. It’s gone in and out of business for the longest time and hopefully it’s new owners will make headway with it. It has a lot of promise but as far as I know it is going to be devestatingly remodeled. The lobby is going to be torn out. Horrible! It has really awesome old lights hanging from the ceiling and a grand entrance to the main screen.

Originally when it first opened on June 16, 1945, it only had the one large auditorium, but somewhere in time the three smaller newer screens were added on the side. They are not in very good condition but the original Stockton theatre is great. Hopefully we will see a rejuvenation of the property, not an abomination.

Fire of undetermined origin caused an estimated $175,000 damage to a Stockton theater. There were no injuries. Authorities say the flames gutted much of the interior of the Stockton Royal’s main theater. There was also extensive smoke damage to three adjoining theaters, recently added in a remodeling project at the Royal.

Here is a weblog post by the late Bob Wilkins with several photos of the Stockton Empire both before and after its renovation.

Ken mc: The State Theater of the photos was located in the 300 block of main street. It was remodeled and renamed the Esquire Theater in 1954.

There was a beautiful FOX THEATRE located in downtown Stockton, however I am unable to find it listed anywhere on CT.

KenRoe You’re right. I forgot that it was called FOX CALIFORNIA. Thanks again!

The Fox Theater is now the Bob Hope Theater.

Anyone looking for historical pics and info on theaters in Stockton CA should visit historical Stockton on Facebook. Gene Wright has an archive that is superb and complete. That’s right Wright has them all