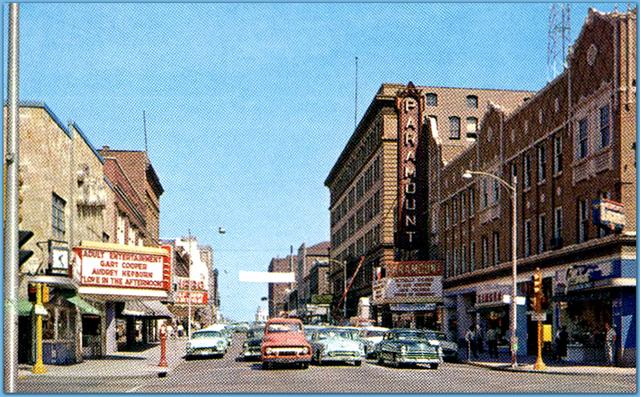 The Starland Theater opened on December 25, 1913. It was renamed Times Theater in 1942. The theater was located directly across the street from the Paramount Theater.

From 1957 a view of the Times and Paramount Theaters in Anderson.

Meridian Plaza puts it way off and not accross the street from the Paramount.

Owned by Alliance Amusement Company of Chicago. They owned theaters in Illinois, Indiana, Wisconsin and the state of Wasington.

I believe this theater was also called ther Riveria. I can almost make out the letters on the building in the photo. Part of the roof collasped in I believe 1979. The theater was open but fortunately no one was hurt. At the time it was owned by Spiro-Mallers Theaters. I was manager of the Paramount when this happened. At first I thought it was a fire, as a cloud of dust billowed out of the theater followed by the audience. I talked to the projectionist the same evening(I remember it was Sunday) he said he saw a lot of particles and drops of water through the beam of light from the projector, and hit the house lights, stopped the movie. It was thought that water accumulation on the roof caused the cave in. I went into the theater and looked at the damage, I would estimate that about a 12' wide section came down across the width of the auditorium, you could see the sky. It never reopened.

koosmal: The Times and Riviera Theatres were on the same block, but were not the same theater. The Times has not been demolished, but the Riviera has. The Times Theatre was in the building next to the alley, as shown in the current Street View. The theater on the corner in the photo Don Lewis linked to in the first comment was the Riviera. You can see a bit of the Times' marquee up the block in that photo.

This photo from Indiana Memory shows the three houses from a slightly different angle, with a slightly better view of the facade of the Times.

The caption of this photo from Indiana Memory indicates that the name Starland was moved at some point to the former Grand Opera House, which had been converted to a vaudeville house called the Granada Theatre in 1924. I tdoesn’t give a date for the renaming to Starland, but it must have been when the original Starland became the Times.

A closer reading of the Madison County Historical Society page I linked to in my previous comment reveals that the Starland Theatre became the Times Theatre on March 29, 1942.

This item from the February 12, 1916, issue of The Moving Picture World concerns a change of ownership at the Starland Theatre:

“ANDERSON, IND.—The Starland, the largest photoplay theater in Anderson, was purchased from E. E. Martin, of Cleveland, Ohio, by the Meridian Amusement Company, and the new management took charge on January 16th. The Meridian Theater of this city and the Fisher Opera House, at Danville, Ill., are also controlled by this company. The company is composed of Fort Wayne, Ind., and Anderson capital, including G. H. Heine, Judge W. J. Vesey, Arthur Beuke, W. J. Scheiman and F. G. Heine, of Fort Wayne, and J. G. Heller, of this city. Mr. Heller, who is an able manager, now has charge of both of the local theatres. The purchase price is named as $15,000. The seating capacity of the Starland is 547. Some new improvements are being made, including a change in the heating system and the Installation of glass storm fronts. The lobby poster display will be augmented by the installation of some permanent display attachments. The policy of the theatre will include Fox, Metro and Triangle pictures. The Meridian will use Paramount, World and Equitable and both houses will use Mutual Masterpictures. Both houses will open on Sundays, from 1:20 to 7:30 P. M.

“Elmer Howell, who managed , the Starland, will leave. He will be associated with an enterprise in another city in Indiana. The music will be in charge of J. Russell-Robinson Bros.-John C, and they will have charge of the music at both houses. The Meridian company has met with signal success since Mr. Heller has had charge of the company’s interests here and the new accession is no doubt partly due to Mr. Heller’s foresight and business acumen.”