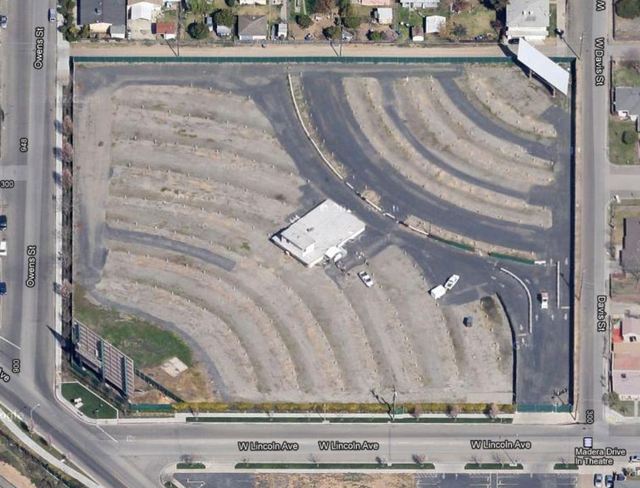 The Merced Sun-Star says that this is one of the last drive-ins in the San Joaquin Valley.

The El Rio Drive-In was opened October 27, 1948. It has been owned since 1972 by brothers Bobby and Shawn Gran who also own the Movie Cinema 6. It is open from May to September and there is always a double feature on both screens.

My favorite drive-in.Glad to see it is represented at this site.I go at least once every couple weeks during movie season.

This changing name business is pretty confusing. The 1948-49 Theatre Catalog lists the Madera Drive-In as under construction. The 1949-50 edition lists the El Rio in operation, as does the 1952 and 1955-56 editions.

The 1956 Film Daily Year Book of Motion Pictures lists, for Madera CA, both the El Rio Drive-In and the Madera Drive-In. The 1964 edition lists only the El Rio, so I’m guessing the second drive-in in ‘56 was a crossed wire.

On the other hand, the 1984 International Motion Picture Almanac shows the only drive-in in Madera as the single-screen Park Vu Drive In, owned by R. Gran. And the 1995 edition of Goodridge’s Guide to Flea Markets also mentions the Park Vu Drive-In Flea Market at 201 Lincoln. It was definitely known as the Madera by 2004, so the Park Vu must have been an intermediate name.

news article about the 2018 reopening it has a new owner

To elaborate on my comment a couple of years ago, the El Rio was in the very first Motion Picture Almanac drive-in list (the 1950-51 edition), and the Park Vu was in the very last (1988). Considering how slow the MPA reacted to changed in the 1960s and 70s, the name change probably occurred within a few years of 1970.

The full MPA record, which was actually quite stable:

it i now the second to last san joaquin valley drive in that is still operating the other being the ceres cruise-in theatre. also california’s oldest operating drive-in