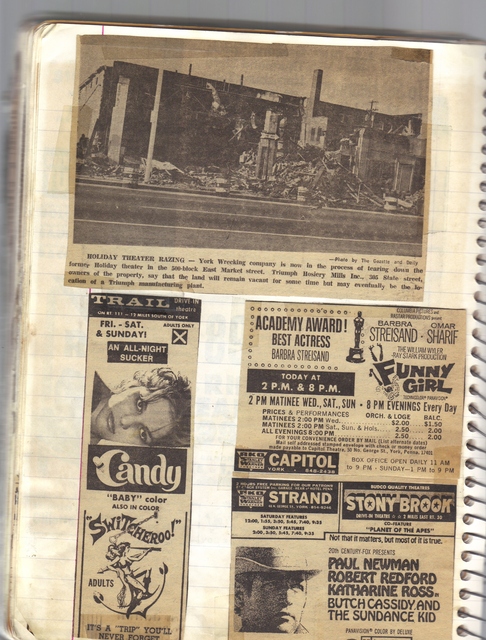 A conversion of a trolly car manufacturing unit. The York Theatre was opened June 15, 1934 with Janet Gaynor in “Change of Heart”. It was listed as part of the Boyd Theater Circuit. By 1943, it had gone from that circuit’s listings, but it was still operating until closure in 1956. It became a live theatre and was then renamed Holiday Theatre from January 11, 1957 to closing in 1968. It was demolished in September 1969.

This theater was at some time taken over by a local owner, Charles MacDonald, who also owned the Southern on Jackson Street in the city. MacDonald renamed it the Holiday. Both theaters were first-run. Native Yorkers remember going there into the 1960s. It was demolished to make way for a Danskin factory, date unknown.

I went to York “Jr” College from 1964 to 1966. I attended films at both theatres during that time. However, the Southern Theatre being closer to the college I frequented more than the Holiday. The Southern, although a first run theatre, reminded me in size and design of the Strand Theatre on Manor Street in Lancaster which was a second run theatre. If my memory serves me, which is questionable, the Holiday theatre was a much more elaborate theatre than the Southern. I think the last time I traveled on South George street and went past Jackson Street I saw the Southern Theatre is now used as a church. Did the Holiday Theatre have a parking lot either beside or behind the theatre? Being a poor college kid in the 1960’s we walked everywhere and did not need to know about the parking situation. One of the movies I remember seeing at the Holiday was a “special engagement” of George Steven’s film “The Greatest Story Ever Told.” I also remember seeing Don Knotts “classic film” “The Ghost and Mr. Chicken” at the Southern.
Those were the days!!!!

This theater might have existed before 1930. Prior to building the Strand Theatre in 1925, Nathan Appell Enterprises operated at least two other theaters in York, both of which were in operation during the mid-1910s. These were the Orpheum and the York Opera House. I haven’t found either name mentioned after the 1910s, so either one of these might have been renamed the York.

The Opera House was quite a distinctive building (a vintage postcard site currently has this card listed for sale), so a photo of the York would quickly reveal if it was the same theater or not. Or if DennisZ is still around maybe he’ll recognize it. His comment does say that the Holiday was an elaborate theater.

Nathan Appell was a partner in a project to build a four-story theater building in York in 1920. The project was mentioned in the December 20, 1920, issue of the industrial trade journal Power. If this project was completed, it might have been the York. Again, a photo of the York would reveal if it was in a four story building.

During the mid-1910s, York also had at least four theaters not operated by Appell; the Scenic, the Hippodrome, the Wizard, and the Jackson. There might also have been a theater called the Alhambra, though this might have been one of the others, renamed. With the exception of the Jackson, which Appell bought in 1926 and renamed the Capitol, any of these might also have been taken over by Appell and been renamed the York. As with the Orpheum and the York Opera House, I’ve found no references to those five theater names in York later than the 1910s.

I added a photo and article from the York newspaper from October 11, 1969 with the razing of the Holiday Theater. Some other theater ads on bottom.

We can eliminate York Opera House as a possible AKA for the York Theatre. A book published by the York Chamber of Commerce in 1945 says that the Opera House was located on Beaver Street.

A book published about 1918 said that York then had ten theaters, including the Opera House and a theater presenting Keith vaudeville. It gave the names of only seven of them, though: the York Opera House, the Jackson, the Hippodrome, the Scenic, the Orpheum, and the Wizard.

I worked for my father in York in the 60’s and 70’s. I was a service person for my father’s Whirlpool Store. Anyway. I remember going east on Market street and seeing all the action at the RR crossing which was next to the building which housed a H & L 5 and dime store, a sewing factory on the second floor and The Holiday Theatre at the buildings far end. My understand is that several RR cars had broke loose and made their way down the tracks at a good rate of speed and there was a curve at the buildings location and the cars derailed and hit the building. The side of the building facing west was demolished and, if I remember correctly, there were people hurt that worked in the sewing factory. It is probably in old news clippings of the York dispatch or Gazette and Daily papers of that time. It was sad but that is what caused the demise of the Holiday (York) Theatre. It was a beautiful Theatre and I had a lot of fun there as a child. It played all family movies. Also, many don’t know this but the White Rose Skating Rink was behind the Theatre but burned years earlier. The Rink was located between the Holiday Theatre and the A&P Store on East Phila Street at the RR Tracks. The RR company was Western Maryland RR. York used to be a city of wonder. It was great there as a child.

The building was home to a trolley car manufacturing plant in 1897 that sat idle for two decades becoming the York in 1934. The York Theatre discontinued film operations in 1952. It became a live venue for three years. It then became the Holiday Theatre from 1955 to 1968. After a salvage sale, it was torn down in September of 1969.