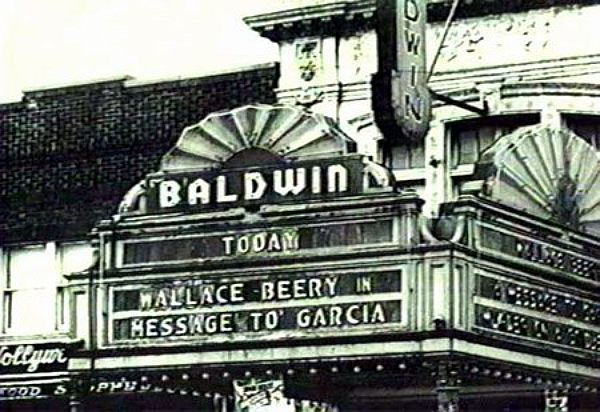 Opened in 1922 as the Washington Theatre, this theater could seat 1,148 and contained an organ. It was designed by Frederick D. Madison.

The Washington Theatre remained a second-run theater into the early 1980’s, until it was acquired by a local theater group called Stagecrafters and renamed the Baldwin Theatre. Seating was reduced to 372 in the main stage and 100 in a studio stage. The old movie house has been renovated as a venue for live theater.

The original entrance and foyer at 422 S. Washington Avenue has been demolished and was a vacant lot for many years. In 2006 work began on an 18 story building containing lofts and parking which was completed in 2007. Access to the Baldwin Theatre auditorium is now at the former rear of the building at 415 S. Lafayette Avenue.

The Baldwin Theatre contains a main stage, a smaller second stage, and in addition to plays and musicals, presents children’s theater and also hosts occaisional organ concerts and other special events.

Did the Baldwin lose its lobby? It looks like only the auditorium is left.

In reply to Nix12 (4/12/2007), the lobby of the original theatre extended east to Washington Street, hence the prior name of the theatre, and was a long narrow struture called “the neck.” When the building to the east was demolished (mid 60’s?) so was the original lobby. When the community theatre group Stagecrafters restored the building, a new lobby was created.

Correction to the above misstatements: The theater was built as the Baldwin in 1922, it opened and held that name until 1936, when it was renamed the Washington, for the street the entrance was located on.
The lobby was a long, narrow “shooting gallery” sort of room that went from the entrance on Washington street and went and went until you entered the back of the auditorium half a block later.
The theater was in imminent danger of being demolished in the early 80s, it had closed after an independent operator shut down a very nicely programmed classic movie schedule there and several fires of suspicious origin occurred within the theater. The former Kresge store to the north of the lobby space caught fire as well, the store and lobby were demolished around 1984.
Enter Stagecrafters, a local drama group. They convinced the city officials to back off of their pro-demolition stance and allow Stagecrafters to purchase the theater. This happened in 1985, the group restored/remodeled the interior of the theater to meet their needs. It was renamed the Baldwin again at that time. The rear of the main floor has two raised areas as lobby space,this was a big job using poured concrete. Two additions were built onto the building along the north side, a workshop at the west end, a three story addition on the est side that contains a social kitchen, offices and rehearsal space, a stairwell feeding those floors as well as a handicapped accessible elevator.
The main auditorium is much smaller in seating area, them auditorium now seats around 375 people. The balcony has been re-purposed into a smaller “black box” theater where the group performs plays that are more contemporary or experimental in nature.
another addition was built along the north side of the building, connecting the earlier additions, an office and box office occupies the entrance level of this structure, another construction shop that also is storage for set pieces is above that.

The Royal Oak Historic District Study Committee has been contacted by Stagecrafters to prepare a report for the submission of the Baldwin Theater building for historic designation. We have just begun the study as of February 2011. If anyone has any information or photos they would like to share please contact Tammis Donaldson at Thanks!

Circa 1939 photo as the Washington Theatre added courtesy of the 13 & Woodward Facebook page.