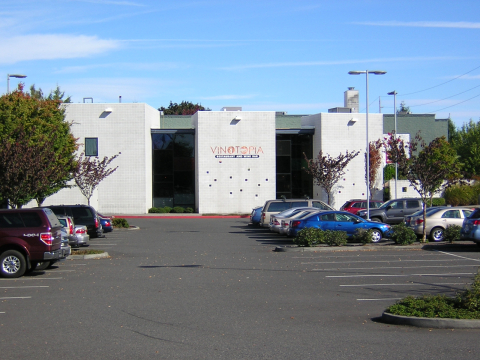 Opened in 2005, this theater is an upscale multiplex, featuring the Vinopolis restaurant and wine bar and deluxe seating throughout. Three auditoriums for those over twenty-one are described as "Living Room" theaters with more intimate clustered groups of seats and a "Pillow Pit" section. In May 2019 it was taken over by AMC. It was closed in March 2020 due to the Covid-19 pandemic.

I recommed going to WEDSITE, clicking on AUDITORIUMS and reading, also PHOTOS, and enlarging, I thought it was interesting.

Could use more info and photos.

Known as the Cinetopia Mill Plain 8 on the website.

I’ve been in there at least once every 3-4 years since it opened and all the crappy reviews on YELP are true. Seriously, this place gets crappier and more run down every time I go there. I don’t know how it even qualifies as a “treasure” unless it’s to document all the current and past cinemas/video halls in Vancouver.

It seems whats-his-nose opened it and made his mint off it, then opened the mall location (which honestly isn’t much better) and let Cascade Park die and rot. Now that AMC have grabbed it I expect they’ll completely run it into the ground with little upkeep and no renovations until it collapses on itself and say “oh well”. Even the former Tom Moyer (Luxury) theatres were refurbished and updated to full late-80s splendour after they were bought out by Act III.

If one good thing came out of the deal, it’s that Regal no longer have a virtual monopoly over chain cinemas any more.

Was a great theater when it first opened and for many years after. First digital projection in the area. Good food. Classy. Went downhill after Rudyard gave up control and then really went downhill during the protracted legal battle with AMC. Result of that battle? AMC gobbled up all Cinetopia theaters. It will be interesting to see if AMC renovates or simply abandons it.

It’s been shut for months now due to AMC’s long-standing financial woes, complicated by more recent virus-times politics and now bankruptcy, though the last couple of weeks or so I’ve seen people in there working on it (1). The patio section adjacent the cafe has become a popular hangout for local bums because of its relative seclusion and the wall around it, and people have been dumping their garbage in the northeast end, including (most recently) various home refrigerators and a front seat from a truck. Inside, I imagine it’s probably full of mould (2) from high humidity this spring/early summer, from being shut up for so long with (presumably) no ventillation and general neglect. Black mould is especially a known problem in the south of Clark County, and especially east Mill Plain/Cascade Park/Mountain View because of the area’s proximity to the river, its high water table and vegetation. Ever driven/ridden past the Safeway on SE 136th, near Wy East, after a couple solid days of rain? I’d be surprised if they actually reopen it or if the health department/city doesn’t condemn it. By now the property’s value as development land probably far exceeds that of the theatre.

(1) Late last month as I rode past on me bike, I saw a slip of paper taped to the front door, which upon closer examination was a receipt for a carbon dioxide delivery from NuCO2, which was what tipped me off. My initial reaction: “wait— they’re actually going to try to REOPEN this dump¿!?” Well, AMC.