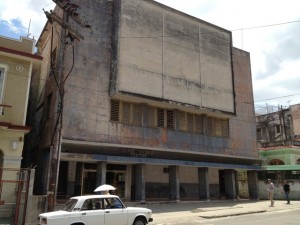 The Teatro Los Angeles opened on March 9, 1949. The cinema was lavishly furnished both in the lobby and auditorium. Seating was provided in orchestra and balcony levels. On each of the splay-walls beside the proscenium were large line drawing murals depicting a naked female figure with a movie camera.

The “Los Angeles” as I used to call it during my teen years in the late 50’s and early 60’s was a modern cinema in a middle class neighborhood in Havana. It was a first run theatre though playing most of the films, American mostly, that played on first run theaters in the city. It was open until recently since I check Havana websites for movie schedules in the city and it has been listed up to then. There are some very nice exterior pictures of this cinema on flicker.com.

Hi Raf, do you happen to remember what was the name of the cinema Errol Flynn co-owned in Havana?

It wasn’t Los Angeles. The exact address of this theater was Juan Delgado 59 between Lacret and Luis Estévez streets in Santos Suárez. It is incorrectly positioned in El Cerro district in the street map. I think this was probably the last movie theater opened in the district of Santos Suárez before December 31, 1958.