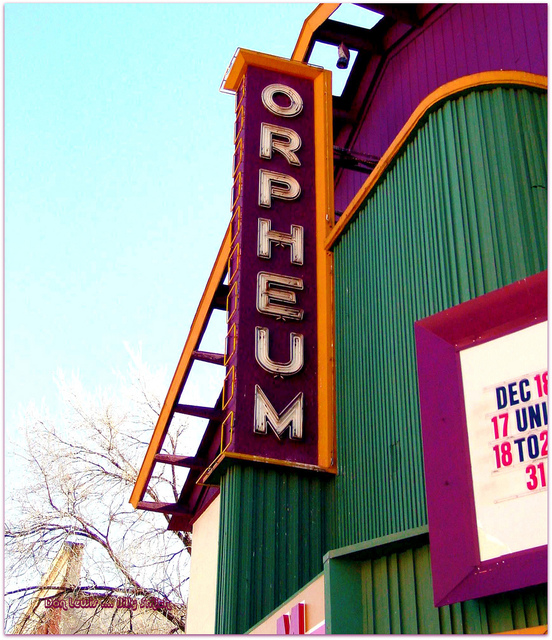 The theatre is located next to the turn-of-the-century Weatherford Hotel, in downtown Flagstaff.

After comparing a b/w vintage photo under Related Websites and then viewing a current photo it doesn’t even look like the same theatre.

I have visited AZ in past years…Scottsdale, Phoenix, Sedona, Tucson, Grand Canyon, but would entertain the thought of returning again in the near future to visit your “busy little town” of Flagstaff and this time to check out the many theatres especially the Orpheum in Phoenix as it is atmospheric.

Here is another photo of the Orpheum:
http://tinyurl.com/yuzowh

A 1973 view of the Orpheum Theater in Flagstaff.

Neat looking building. We can assume the original Orpheum name built into the brickwork is safely behind that newer facade.

The Orpheum’s website history though, doesn’t say when the newer facade was installed. Obviously before the 1973 photo. Maybe late 50's early60’s given the style?

Looks like their band schedule is a little thin as of now. I thought maybe The Misfits was a screening of the 1960 Gable/Monroe film, set in a Western town. The skull logo though solved that.
Not far off though, as The Misfits was easily one of the most depressing films I’d ever seen.

This is from Boxoffice magazine, November 1947:

FLAGSTAFF-Northern Arizona Theaters has closed the Orpheum here until about the first of the year to permit extensive remodeling. Clarence Shartzer, manager, said the work would cost about $100,000.

An addition which would increase the capacity to more than 1,000 persons was largely built before the Orpheum closed. Further improvements will include a new floor, new stage, pushback seats, new projection and sound equipment, an enlarged foyer and a new front.

From 2006 a photo of the Orpheum Theater in Flagstaff.

Prior to 1933 this house was called the College Theatre. The name change was noted in the “Theater Changes” column of the January 31 issue of The Film Daily that year.

In late December, 1915, a storm dropped some sixty inches of snow on Flagstaff. A maintenance man, thinking to melt away some of the snow and reduce the weight on the theater’s roof, sprayed it with water, precipitating its collapse on New Year’s Eve. The house was eventually rebuilt and reopened as the Orpheum Theatre.

The Orpheum was listed in the FDY through 1929, but in 1930 began being listed as the College Theatre. In 1933 the name Orpheum was restored.