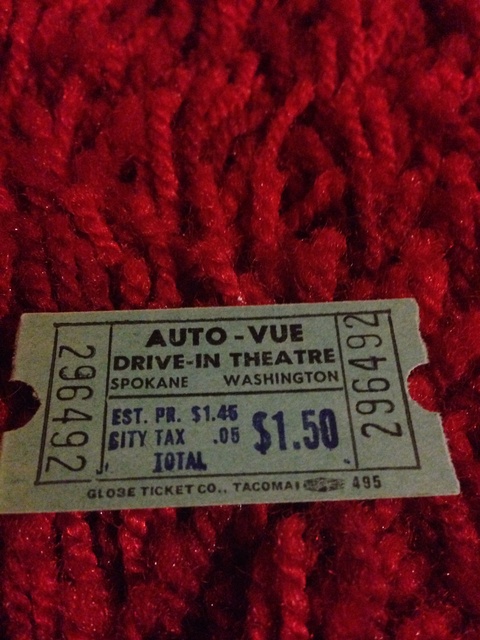 Yes, It parked 400 cars and in the late fifties it was owned by AUTO VUE THEATRES.

Approx. location for this drive-in was a block north of address listed above.Lowe’s is where the theatre was.

By the mid-to-late ‘70s, when I was old enough to be aware of such things, the Auto-Vue was showing standard first-and-second-run features, usually with an action bent. I remember seeing “The Hot Rock,” “The Stone Killers,” “The Driver” and “Thunderbolt and Lightfoot” there — just to name a few. Keep in mind, back in the ‘70s, many first-run movies never played the major moviehouses — there just weren’t enough screens in town — and drive-ins were the only place to catch movies like these.

The Auto-Vue was notable for several reasons. It had a wonderful marquee out by the highway, a neon-trimmed sign that took the shape of a streamlined fastback car, circa 1950. The screen was enclosed in metal in the rear, facing the highway, in a streamline moderne style.

But something else I remember clearly is the fact that the reel between the first and second features never, ever changed. After the trailers came 20 minutes of snack-bar advertising and reminders to turn off your headlights and promises to prosecute anyone stealing the in-car speakers, and the film was so old and so faded that none of the colors looked right. In fact, some of it was still in black-and-white. I saw that reel so many times I could recite half the ads the moment they came on-screen. In an age when the TV was showing ads about “the Pepsi Challenge,” the Auto-Vue was still showing ads from the early sixties touting “Pepsi — for those who think young.”

I always meant to get a picture of that lovely marquee — but by the time I moved back to Spokane in the mid-‘80s, the Auto-Vue was already gone.

The AutoVue was open by 1949, based on this note in the Nov. 12, 1949 issue of BoxOffice: “SPOKANE – The AutoVue Drive-In north of the city limits closed its 1949 season recently. Cyrus W. Young of the company said the ozoner would reopen next spring as soon as weather permits.”

The Autovue (Auto Vue) Drive-In In Spokane According To The Spokesman-Review Opened Its Gates In June 1946.

I Can’t Find A Closing Date To The Audiovue, But Was Still In Operation Since 1981 With First-Runs.