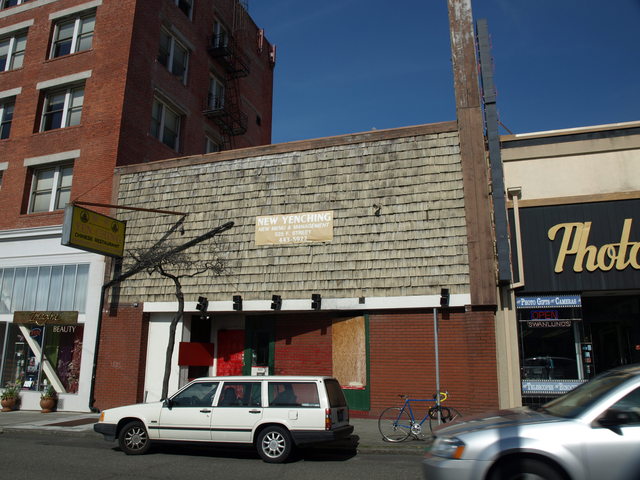 I believe the Rialto Theatre was built in 1917 and operated until 1960. It was down the street from the Eureka Theatre and part of the George Mann Redwood Theatre chain.

The building now houses a Chinese restaurant. I would be so grateful for any info anyone has on this theatre and its history.

While no discernible exterior trace remains of the Rialto’s entrance, the auditorium—a big brick box in the middle of the block—was still standing as of a couple of years ago when I last set foot in Eureka. About ten years earlier, during a previous stay in the area, I got to go inside the shell of the Rialto. I was welcomed by a couple of custom wood furniture craftsmen who were operating their business in the former auditorium. Though largely gutted, there was still much to be seen. The ceiling was largely intact, though I recall a covering of square acoustical tiles over much of it. There was Neoclassical molding and coving around the edge. The walls featured pilasters which had…if memory serves me correctly…Ionic capitals. Between these were areas of more acoustical tile. The tile was painted a sort of terra cotta color, and the pilasters and cornices were beige or cream. There had been a balcony, but it was either ripped out or converted to office or storage space. I do not recall seeing a proscenium or organ chambers, as I believe these had been gouged out. One room off to the side was accessed by doors with porthole windows in them—clearly reused from the theatre’s entrance, and likely dating from a Moderne remodeling at some stage in the Rialto’s history.
The gentlemen working in there were Eurekans, and both remembered that the Rialto had indeed closed for movies sometime in the early 60s. They may have told me the exact date, but I don’t recall it. What they remembered more clearly, and spoke the most about, were the times after that when it was a rock concert venue. It sounded like things got pretty wild during that time. I don’t recall the date of its ultimate closure, but I think it was shuttered by the early 70s.

Thanks Gary, thats terrific! If anyone knows anything about staff and specifically a projectionist or cameraman named Kenneth Killburn that worked at the theatre soon after the opening, that would be wonderful. All information is terrific though. Thanks again!

Hasn’t the old Rialto theater been renovated and become the Arkley center? My Mom grew up there and that’s what she said when I visited last week.

No. The Arkley Center is the former State Theatre.

The Rialto opened June 25th 1918 according to the information I have found … The Yen Ching Chinese restaurant that occupied the building burned in December of 2010 and the building has sat empty since.

Below is the website that details and article about the July 1936 showing of “Marihuana” at the Rialto. Photo of newspaper print ad added to Photos Section.