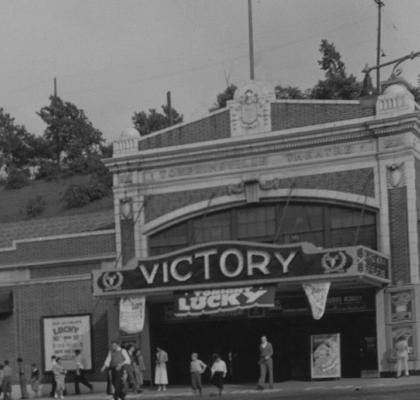 Located in the Tompkinsville district of Staten Island on Victory Boulevard, across from Brook Street. The Tompkinsville Theatre was opened in 1925. In April 1925 a Wurlitzer 2 manual 3 ranks theatre organ was installed. Later renamed Victory Theatre, by 1950 it was operated by Liggett-Florin Booking Service and they were still the operators in 1957. It closed in 1961. Last news was that this theatre housed office supplies. Its original name still remains on the façade.

On another theatre page some of us were discussing poor projection and projectionist with substance abuse problems that ruined shows. I am reminded of a story that took place at the Victory.
In the late 50s I did some projection relief work for the Moses brothers both at the Victory and Lane theatres on Staten Island.
One afternoon, I received a phone call from a very frantic theatre manager at the Victory, while I do not recall her exact words, it went something like this:
â€œVito, itâ€™s Josie, Johnny is drunk again and I donâ€™t know what to do. First the news came on, then the cartoon came on and now the news is on again, I donâ€™t know what is coming on next!â€
So I rushed down to the theatre to find Josie surrounded by annoyed patrons and trying to give refunds to a Saturday afternoon crowed of mostly kids.
I rushed up to the booth and found Johnny, who was barely able to stand up, I said to him â€œOK John your relief is here go rest a while in Josieâ€™s officeâ€. Sadly, that was a situation that happened from tome to time in those lonely projection booths, when the only company a man had were his friends Jim Bean and Johnny Walker.
Well I got things going again, Josie bought me dinner, and there was an extra $5 in my pay packet that week.
Hey …five bucks was a lot in those days.
I just want to tell all of those reading this that Elias Moses, who along with his brother Charles, owned and ran the Victory, Lane and Stand, was a great man to work for; he always looked out for and appreciated loyal employees.

I remember in the late ‘50’s – early '60’s the Victory always showed the same movies as the Lane. My grandmother lived a block away, so whenever i would visit, a trip to the Victory was in order. The one movie I distinctly remember seeing there was “The Magnificent Seven.”

Yes larry, the Victory would often play day and date with the lane.
The Moses brothers owned four theates during that time.
Lane, in New Dorp
Victory, in Tompkinsville
Strand, in Great Kills
New Dorp,(which was also called the Staten. or “the Itch”)

As a kid in High School I worked as an usher at the Lane,
and did the marquee changes at both the Lane and Victory.
In my senior year, in addition to working for Mr.Moses,I started working for Fabian at the Paramount in Stapelton.
Sadly, all those theatres are gone now.

I remember going to the Victory theater to see my first movies as a kid – “Pinocchio” and “Darby O'Gill and the Little People.” We lived in the area than, and we walked to the theater. I still ride by the theater on a bus twice a day.

Story of the drunk projectionest pretty good, I knew of a few who drank in the booth but stayed in pretty good shape to do their job.

I can’t recall any projectionist of all the theatres I worked that ever drank in the booth.They were all Union men and their Business Agent was in and out at lot in the early 70’s not so much in the later 70’s.by the 80’s you never saw him.But I don’t think the guys that knew would ever do that.Now the parking lot after a midnight show,well that is another story…

Yeah Mike our guys were “Union Guys” too.Their Business Agent worked out of our building.I will say that they were like the Managers we only drank when we were almost done for the night.They would not let many people in the booth anyway,so who knows whatever else they did up there.

My company had a satellite office in nearby St. George. Wandering around at lunch one day, in the 1970’s, I came upon the theatre which, as I recall was an empty space for rent with trees and bushes making it look like a real relic. Better a reused space rather than an abandoned one or one that has been demolished.

I enjoyed reading all the comments. Charles Moses is/was my grandfather. My brother and I would go to the Lane theatre on Saturdays. We lived in Staten Island until 1958. Now FL

Listings in the Advance (the local newspaper) ended in 1961 for this theatre.