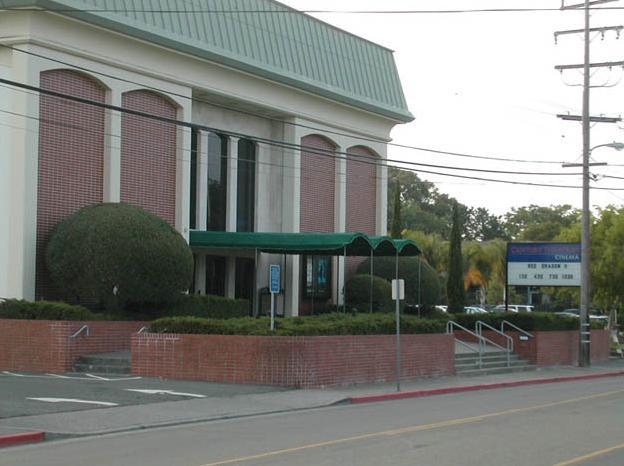 Typical 1960’s shopping center cinema. Opened by the Blumenfeld Theater Circuit as Cinema 1 on December 19, 1969 with Keir Dullea in “2001:A Space Odyssey”. The Century Cinema is very similar in style to the former UA Cinema 150 in Santa Clara, CA. A square box with steel escutcheon around the top perimeter of the building.

The complex was renovated from floor to ceiling by Pacific Theatres in 1999 or 2000 and is said to be one of Steven Speilberg’s favorite movie theaters. It was closed by Cinemark on March 16, 2020 due to the Covid-19 Pandemic. In June 2020 it was announced that the closure would be permanent.

The Cinema (as it was then known) was among the handful of theaters equipped with Cinema Digital Sound (CDS), the 1990-1991 precursor to the contemporary digital sound formats.

Make a visit SOON!!! As this single screen large theatre is about to be torn down soon!!!! When It opened they had a large semi curved 70mm screen but when Pacific took It over they made the screen a little smaller. Now Century/Cinemark runs It before the wreckers come in. This is the best theatre in Marin to see a film. Come say goodbye before It is turned into a pile of dust. G Lucas ran all his films here with the best of sound and picture.

The Century Cinema in Corte Madera was opened in December, 1969, by Blumenfeld Theatres, in partnership with Cinerama Corporation of America, and was originally known as Cinema 1. The house featured a 56-foot curved screen and continental seating, and was designed by architect William B. David.

Anything but a typical shopping center theater of the period, the free-standing house on its raised podium, with its white columns and mansard roof, was designed to recall the Dorothy Chandler Pavilion of the Los Angeles Music Center (the Cinema 1’s front originally featured large windows which have since been filled in with red brick, greatly lessening the effect.) David was using a regional style that came to be called Hollywood Regency, which had been pioneered in the 1940s by architect John Elgin Woolf.

Hollywood Regency became a fad in the 1960s, especially in southern California, when block after block of Spanish style bunglows, Tudor and Norman cottages, and nondescript small office complexes around the region were remodeled and suddenly sprouted faux mansards, thick, arched window reveals, and non-functional shutters frequently painted in shades of pale blue, green, or gray, all in emulation of the pricey mansions Woolf had designed for a long list of people in show business. Even many of the dingbat apartment blocks that were put up at the time sported Hollywood Regency facades.

The style was rarely used for theaters, though, so the Century Cinema is a pretty rare type. It’s a bit ironic that it is going to be knocked down just when a revival of Hollywood Regency decor has gotten underway.

This opened on December 19th, 1969. Grand opening ad in the photo section.

Though, for now, Century is still operating this house that the company no longer owns, the likelihood that it will in time be demolished for a new development without a theater in it remains high.

This article is from March, 2017, but the redevelopment proposal it describes is from the current owner of the building, so it seems likely that it will eventually get built in some form.

This nice great former curved screen 70mm film theatre is still open. Went to see ‘Green Book’ today in 1.85 and at least they are closing their side masking again now for flat DCP movies. Id’d like the place to still stay open with the new furniture store to build around it and in the large parking lot. The new store will not fit in the area with the houses across the street. A few years ago Century was going to put in a larger XD curved screen and do some remodel work with new curtains and seats, that never took place. Lets hope It will stay open a little longer. So nice to see a new movie in a large single screen cinema these days.

According to Cinemark’s website, this theatre is permanently closed. Last day of operation appears to be 3/16/2020.

The Marin Independent Journal published this article about the closure, which also touches on the effort of other Marin County theatres to weather the present crisis.

So sad this once great large curved screen 70mm cinema will not open again. When the Blumenfield’s ran It new before Pacifi/Cinerama® took it over they had curtains that worked and the screen was much larger, almost like D-150. When Pacific took over and later Century when they put in video DCP the screen got a little smaller and they never bothered to fix the curtains. Still a nice roadshow type 70mm theatre with good parking and stereo surround sound, was never twinned. Maybe some other smart presentation company will take over the lease and bring some showmanship back to the rich $ Marin area.