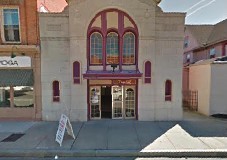 A small first-run theatre located on South Avenue near Gregory Street. The Princess Theatre was opened in July 1912. In December 1927 it was closed due to a fire. Architect Leander McCord drew up plans for a renovated theatre which reopened in October 1928 as the Rexy Theatre.

It was run by JoMor. Showed a lot of ‘art’ films as well as mainstream. JoMor abandoned it when they started building more suburban theatres.

Given its location, the Fine Arts Theatre might be the house that was mentioned in the July 20, 1912, issue of Motography:

“Articles of incorporation have been filed for the Stage-Simpson Amusement Company, which will open a motion picture theater at South avenue and Gregory street, Rochester, about July 15. The company is capitalized at $1,000, and the directors are Clarence G. Stage, Maggie Stage and Frank I. Simpson.”

Frank I. Simpson was mentioned as operator of the Princess Theatre at Rochester in the October 25, 1913, issue of The Moving Picture World. We don’t have a Princess Theatre listed yet, and the side walls of the building the Fine Arts was in look old enough to have been built in the early 1910s. It’s quite possible that this house opened in 1912 as the Princess Theatre.

In the American Motion Picture Directory 1914-1915, the Princess Theatre is listed at 702 South Street.

The Princess Theatre opened in 1912 and transformed to sound in October 1927. Unfortunately, a fire ended its run in December of 1927. Architect Leander McCord drew a plan to revive the theatre for owner Morris Fogel launching in October of 1928 under the nameplate of the Rexy Theatre.

The theatre struggled in the TV age closing briefly in 1953. It was repositioned and retitled as the Rexy Art Theatre launching on March 21, 1953. The Rexy Art Theatre closed with “The Browning Version” on July 30, 1953 after just three months.