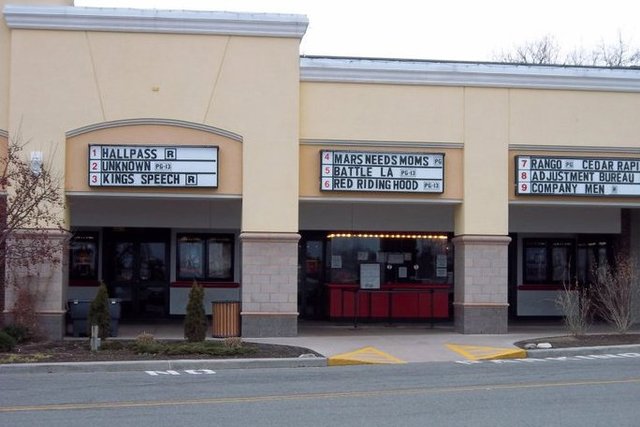 Opened June 3, 1988 as a General Cinema theatre with six screens. Building was originally a Star Supermarket.

Theatre was THX certified at one time.

The theatre was also operated by Entertainment Film Works. The theatre was taken over by Zurich Cinemas, a small regional chain, on March 21, 2002. In the fall/winter of 2002, they cut up the theatre into nine auditoriums.

As theatres go today this is nice place to see a movie. Most auditoriums have large screens and nice seating. No stadium seating though.

Jim- You’re right. The theatre opened in ‘88 and was bought by Zurich in the 90’s. I don’t remember any 70mm movies there either

The rear left theater in the General Cinema was THX certified. It had sand filled walls per Lucasfilm’s specifications and sat over 600 people. After General Cinema Corporation went out of business, the theater sat empty for awhile. Then it reopened under the name Entertainment Film Works. The main problem what that it still had the original 6 auditoriums inside, while other local theaters like the Regal and Cinemark chains had multiplexes with 10-13 auditoriums in them. The theater could not compete and eventually closed their doors. Then came Zurich Theaters. They purchased the theater and reopened it. One of the first things they did was to take apart the 600+ seat THX auditorium and convert it into 4 smaller auditoriums. As much as it saddened me, it was what the theater needed because now with 9 screens, it can compete and has been doing well. It is my favorite theater in the area.

That is kind of sad, but I’m sure it provides a nice contrast to the Regal/Cinemark dominated local market. Not that I hate Cinemark, Tinseltown is my favorite local theatre by far!

If memory serves, Dick Tracy was the only 70mm film there.

I can remember going to this theater and seeing one of the best movies never to win an oscar. that movie being “The Shawshank Redemption”. if I remember the theater may have only been ¼ full..saw many other movies there too, but cant remember which ones,

Recently Zurich has finished replacing all of the complex’s original seats with recliners. I believe they indicated that the seats that are on the stadium decks in the auditoriums that have stadium seating were not converted to recliners (just the floor seating in those auditoriums).

This is an interesting theatre. I worked at all of the General Cinema Theatres in Atlanta and I am familiar with all of the Georgia and South Carolina locations and I have never known one to be located in anything other than a purpose built location. It was always either a new free standing building or part of a new shopping center.

The 70MM projector was probably a Cinnemaccanica Victoria 8. All of the comments here seem to indicate that this location was equipped the same as two Atlanta locations opened at that time, the Merchants Walk 8 in 1986 and the Parkside 8 in 1987. They also had the single THX / 70MM house. The only 70MM to play there were Far and Away and Dick Tracy.

When Gcc closed down, Merchants Walk was taken over by Georgia Theatre Company and converted to stadium seating. However, the Parkside had a history much like this one. In fact, the current operator has also just removed the original seating and put in recliners. The seat count in the large auditoriums dropped from 340 to 133.

There is now different seating. They have the reclining lounges there.