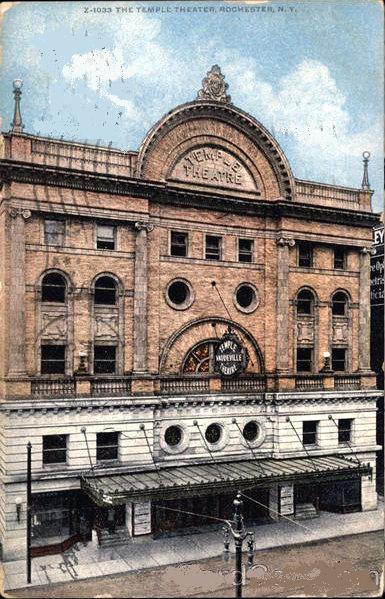 The Temple Theatre was opened December 6, 1907 as a vaudeville theatre. Later switching to movies, in the early-1940’s it was operated by Comerford Theatres and RKO Theatres.

The Temple Theatre was closed May 7, 1951 with Barabara Britton in “Bandit Queen”. It was demolished in 1952 for a parking lot.

The Temple Theatre was an impressive structure, as seen in this vintage postcard. It was built by impresario James H. Moore, who chose the Rochester firm of Leon H. Lempert & Son to design the house (Lempert Sr., had already semi-retired by 1909, and died that year, so the lead architect was Leon H. Lempert, Jr.)

The Temple originally operated as a vaudeville house, but movies were occasionally shown even in its early years. In 1913, Moore presented at the Temple an early form of talking pictures with the sound recorded on discs.

The Temple was built directly across Clinton Avenue from the Lyceum Theater.