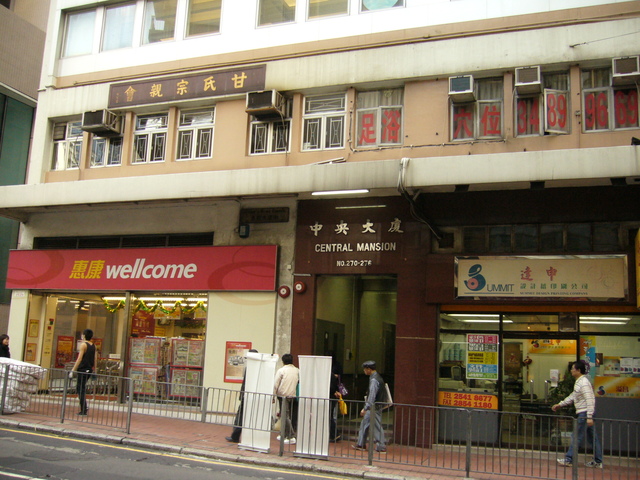 The Central Theatre was situated in Sheung Wan on the Hong Kong Island.
It opened to business on 14th June, 1930 with Maurice Chevalier and Jeanette MacDonald in “The Love Parade”. As the theatre was not in the Central, a map and the traffic and parking guide was advertised on the English language newspapers for the convenience of the patrons.

An article published by the South China Morning Post on 16th June, 1930 had a thorough description of the theatre:
“It is an excellent up-to-date cinema, well situated in the heart of the city and easily accessible by public buses. From the exterior it is an imposing building of concrete facing, and inside is provided with a well-ventillated and roomy auditorium, built especially to accommodate over 1,400 persons.

The decorative scheme is pleasant and artistic. Equally satisfying are the excellent acoustic properties, which allow talking dialogue and the vocal work of the singers to be heard with delightful clarity.

The building itself has been built with reinforced cement concrete to the design of Messrs. Palmer and Turner, architects, who are to be congratulated on their excellent work. It is intended to be a fire-proof building, all the walls, stairs and roof being of fire-resisting materials.

The sound equipment, which is of the latest design, has been installed by the Western Electric Company, and is similar to those used in the great cities of the world.

A unique feature of the theatre, in Hong Kong at least, is the lift service, which will be appreciated by patrons, especially in the warm weather. Two lifts, installed by Messrs. Dodewll & Co., operate from the ground floor to the operating room on the top and those who book tickets for the Dress Circle or the upper circle will find this a great boon.
Another feature is that each floor has its independent exit to the street. How convenient this will be in a rush can well be imagined.

The seating accommodation is divided into four classes. On the ground floor are the stalls, the front and back with 600 seats. The dress circle has a capacity of 422 and the upper circles 384."

Before the outbreak of war on 8th September, 1941, the cinema showed first-run English language as well as Chinese films. It also served as a venue for stage performances and political and social functions.

The theatre re-opened in January 1942. During the war years, besides showing films censored by the Japanese Armies, dramas and Chinese operas with approved libretto were also performed. The Japanese Armies also used the theatre as a venue for political functions.

In February 1945, an authorized gambling parlour was in business in the theatre building.

After the surrender of the Japanese Armies, the gambling parlour was closed. A cafe was opened in the theatre building. It showed first-run English language films in the mid and late 1940’s. In the 1950’s and 1960’s, it showed first-run Chinese films. Before its closure on 10th June, 1971, sexy dance show with adult film was its special programmes in the afternoon.
A residential building was built on the site of the theatre.

An article published by the Hong Kong Daily Press had further information of the theatre which was omitted by the South China Morning Post article.

The lifts of the theatre are Way-Good Ortis.
The theatre is equipped with two Simplex machinesof the latest design.
On the dome, which is over the auditorium, is a painting depicting the scenes of one of Mei Lan Fong(æ¢…è˜­èŠ³)’s favourite acts Tin Nui San Fa(å¤©å¥³æ•£èŠ±),the literal translation of which is “ Fairy Distributing Flowers.” This as well as other mural paintings, was carried out by Tai San.
There is a waiting room on the ground floor, and this might be converted into a restaurant as may be required.