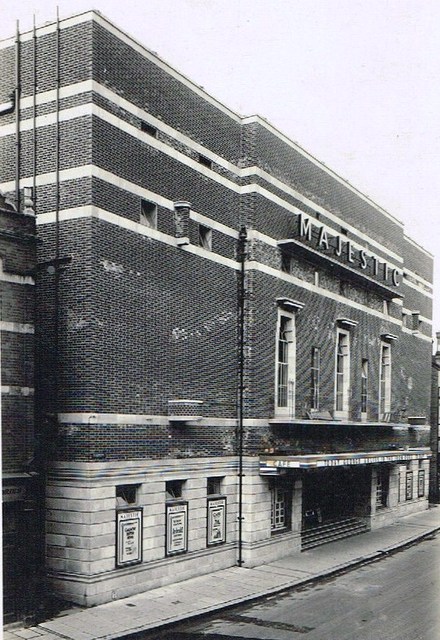 Located on the corner of High Street and Star Hill. The Majestic Cinema was built by an associate company of the Gaumont British Theatres chain, and opened on 15th April 1935 with Phillips Holmes in "Million Dollar Ransom" and George Arliss in "The Iron Duke". Actor Ralph Lynn attended the opening ceremony. The imposing brick exterior had three windows over the central entrance, and white stone at its base. Inside the auditorium, seating was provided for 1,398 in the stalls and 783 in the circle. The decorative plasterwork inside the auditorium was the work of noted interior designers Mollo & Egan. The proscenium was 72 feet wide. The Majestic Cinema was equipped with a Compton 3Manual/11Ranks organ, which had an illuminated console on a lift. It was opened by organist J.W. Hartland. There was a fully equipped stage, and dressing rooms. Also in the building was a 50-seat cafe and a dance hall.

The Majestic Cinema was re-named Gaumont on 3rd April 1950. The cafe was closed in 1957, and converted into a Victor Sylvester Dance Studio. The Compton organ was removed in 1961, and sold to a church in Orpington. In May 1965, The Rolling Stones appeared in concert at the Gaumont. In 1967, it was equipped to screen 70mm film, and "The Sound of Music" played for 8-weeks.

The Rank Organisation re-named the cinema Odeon from 21st October 1962, and in March 1974, it was tripled, with 700 seats in the former circle screen, and two mini cinemas in the rear stalls, each seating 120.

The Odeon was closed on 31st October 1981 and stood empty and unused until early-1987, when it was demolished, and 55 old peoples flats were built on the site.

This page has some interior pictures and more about the Compton organ (scroll down a bit): http://www.comptonhaarlem.nl/engels/history.htm

this Compton organ was brought to holland and installed in Middelburg. My wife and I took thee organ out the concert hall there and installed it in the street organ museum in Haarlem. I visit the old peoples flats in 2006 and some of the people remembered the old cinema and the organ. They were very happy that I had a cd of Len Rawle playing the compton with me. We played a few tracks and that brought back happy moment for the ‘oldies’.