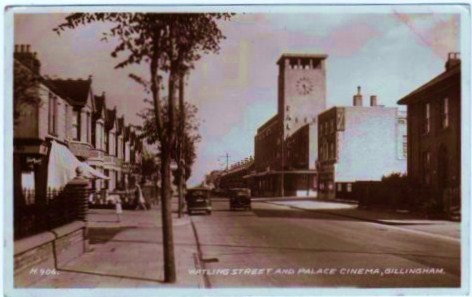 Located on the corner of Watling Street and Beechwood Avenue on the Chatham-Gillingham border. The Palace Cinema was built by a subsidiary of the Gaumont British Theatres chain, and opened on 30th November 1936. It was a ‘sister’ theatre to the larger Majestic Cinema Rochester, which had opened a year earlier.

The exterior had a tall square clock tower, which was outlined in neon at night. Inside the auditorium seating was located on stalls and circle levels. The proscenium was 42 feet wide and the stage was 20 feet deep. There were seven dressing rooms. The Palace Cinema was equipped with a Compton 3Manual/7Ranks organ which was opened by organist Terence Casey. There was a cafe/ballroom in the building, and a large car park opposite the entrance.

The Palace Cinema was re-named Gaumon from 18th December 1950, and usually play films concurrent with the Gaumont (ex-Majestic Cinema) Rochester. The Gaumont was closed by the Rank Organisation on 2nd February 1961 with John Gregson in "The Captain’s Table". It was converted into a 24-lane Top Rank Bowling Alley, which opened in December 1961. Eventually, this was the last of the Top Rank Bowls to close, closing on 31st October 1970.

The building was converted into a B&Q hardware store, and the interior has been gutted. It was later in use as a camping centre, which remains open in 2010 as Camping International. The building is now known as Clock Tower House.