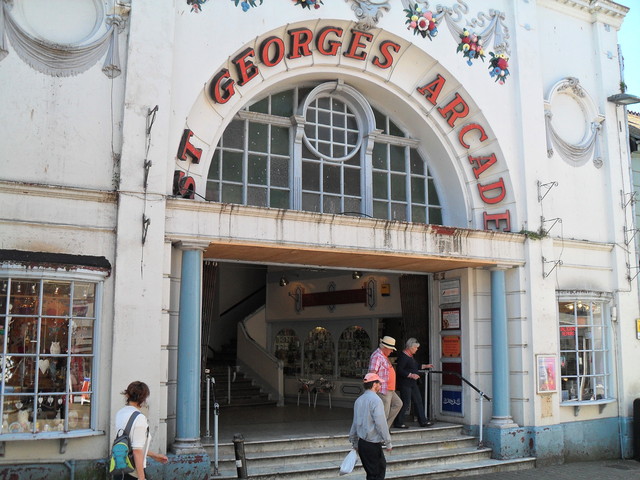 The St. George’s Hall was opened as a cinema on 4th November 1912. In January 1936, it was taken over by the Union Cinemas chain, and they were taken over by the Associated British Cinemas(ABC) chain in October 1937.

The building was seriously damaged and closed by a fire on 4th March 1948. The remains of the auditorium was repaired and a shopping arcade known as St. George’s Arcade was built inside it, retaining the original decorative facade of the cinema. The upstairs section is now in use as a nightclub named Club International.

Thanks for the photos Ken.

I’m not sure if the auditorium was demolished. There is a (very trashy, but awesome in equal measure) student nightclub in the upper part of the building and there is no evidence of cinema use upstairs.

However, downstairs in the arcade, the entrance foyer still retains stairs to what was presumerably once circle level seating (now Club International):

And, downstairs, there is still evidence of a stage/pronescium at the end of the arcade (evidenced by a retail unit which is significantly higher than the rest and must be reached by stairs:

I bet if you removed those retail units and had a look above the false ceilings, there would be some interesting features.

Apparently when it opened it 1912, St George’s was the second largest cinema in the country! The cinema closed in 1948 (my landlady can remember when it was still open and refers to it as Falmouth’s ‘fleapit cinema’). The shopping arcade opened in 1960.

Would love to see some pictures of the interior, in the days when it was a cinema. Alas several searches on Google and flickr have resulted in nothing…

There was a large replica of St. George and the Dragon above the entrance of the building. I don’t think it was original but it was very attractive, probably put there by the developers of the arcade. Unfortunately this was the victim of some late night pranks and has never been replaced although I though the pieces were recovered with a view to doing this.

The St George and the Dragon emblem has been restored. I will be reinstalled in time for a celebration on St George’s Day, 23rd April 2016 at the arcade. The restorer thinks that it is far older than anyone previously thought. Did it only go up when the hall became an arcade? Suggestions are that it came from a church or a ship. Originally it was all gold leaf, not coloured. Anyone got any ideas?