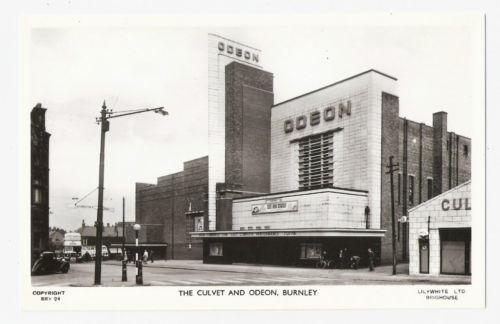 Located on the corner of Gunsmith Lane (today renamed Church Street) and Yorkshire Street. Built and operated by the Oscar Deutsch chain of Odeon Theatres Ltd. The Odeon Burnley opened on 28th August 1937 with Gary Cooper in "The Plainsman". The facade had a typical ‘Odeon’ house style, with cream faiance tiles and a slender fin tower which had the Odeon name across the top. The auditorium ran parallel to Church Street, and contained seating for 1,404 in the stalls and 732 in the circle. A series of troughs in the ceiling provided illumination, and the main decorative feature was a set of grilles on each of the splay walls beside the proscenium. There was a small stage and two dressing rooms, but these were rarely used. The Odeon had a free car park for the convenience of its patrons.

The Odeon led an uneventful life, and from 1st October 1961, Top Rank Bingo was played on Sunday afternoons, but this never took off. It remained a cinema until it was closed by the Rank Organisation on 17th November 1973, with Inge Hegeler in "The Language of Love"(Ur Karlekens Sprak).

The Odeon was demolished and a Sainsbury supermarket was built on the site, which by 2005, had become a Staples Superstore.