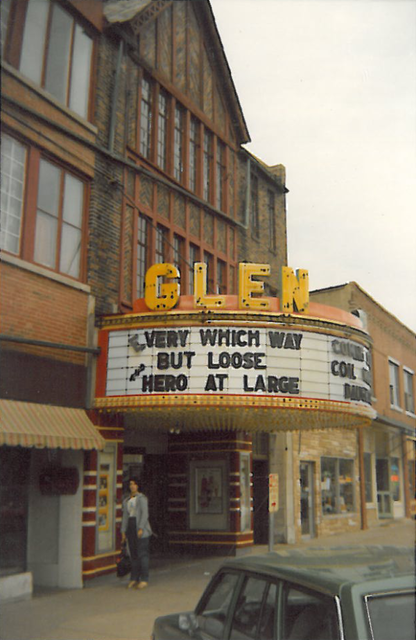 The Glen Theatre, formerly a single screen theatre, opened in February 1927. It was designed in the Tudor Revival style, along with the storefronts on either side of the three-story building. The architect was William B. Betts of Park Ridge, IL, who also designed a number of other movie theaters in the Chicago suburbs. Originally, the Glen Theatre not only featured motion pictures, but live stage acts, as well, and contained a Barton organ.

Today, the exterior remains fairly similar to its original appearance, except for a later marquee, and its vertical sign long since removed. The interior, however, has been heavily altered.

In the late seventies, I lived in one of the small apartments above the Glen. Just before film time the smell of popcorn would waft through the building. The projectionist’s booth was a short walk across the flat roof. In the theater’s basement was a small shuttered bowling alley. That arrangement reminded me of the old Villard theater in Villa Park, designed by the same people, Betts and Holcomb.

whar are the seating arrangements like at this theater? spread out? close together? arm rests?

A scene in the movie “Lucas” (1986) was shot outside with 2 clear shots of the marquee and also inside one of the theaters.

Here is another photo:
http://tinyurl.com/deb2fx

What a horrible movie"MONSIGNOR" we played it first run,but wasn’t charging $1.50 a seat like GlenArt was doing.

This theater was featured in the film ‘'Lucas’‘ (1986) Starring: Corey Haim & Charlie Sheen.

There was a previous Glen theater in Glen Ellyn. It opened in 1914 at 481 Main Street, designed by George Awsumb for T. Stuart Smith. It was operated by Sam Bowden. In 1923 Polka Brothers took over the lease, intending to demolish it and build a new 1000 seat theatre. However, voters shut down Sunday movies, which killed these plans, but they proceeded without Polka Brothers. Later, a theater was proposed for Main & Duane streets, but went unbuilt, as did a proposed theater in conjunction with a Masonic Lodge. The Glen opened February, 1927.