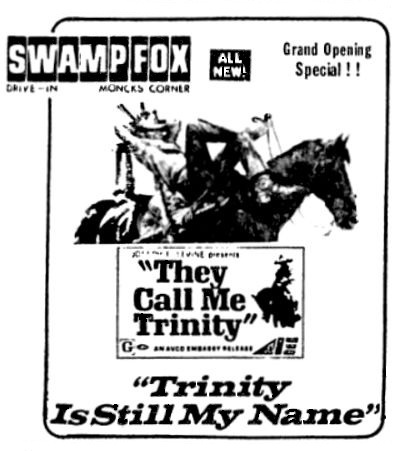 The Berkeley Drive-In was opened in 1950, and was owned by W.T. Friddell and Mary Friddell. It had a parking ramp that would hold 200 cars. In January 1975, the drive-in was leased to Consolidated Theatres Inc. due to W.T. Friddell being ill Consolidated at that time were operating the North 52 Drive-In and the Magnolia Drive-In. The Berkeley Drive-In was renamed Swamp Fox Drive-In.

In 1984, Consolidated Theatres ended its lease and the drive-in was operated by an independent operator and eventually played adult movies. It closed for good in 1986. It sat abandoned and finally the Swamp Fox (aka Berkeley) Drive-In was demolished on June 1, 2006. Eventually the property was redeveloped for retail use.

My Father is the “Independent Owner” named above :)He purchased the lease from Consolidated Theaters based in Charlotte North Carolina and promptly did away with the “Adult Movies” I was the projectionist there for years and I’m the guy you honked and cussed at when the film broke :) If you have any questions about this theater please feel free to contact by posting a comment and asking :)

At Buddy..got any pictures of it? When I wrote that, I could not find who the operator was. I don’t live in the area.

I don’t have any pics but my Mom or Dad may. I will ask him tomorrow morning. They are in their 80’s now but still get along pretty good. I do have pics of my Dad and he was a landmark there! He was 6'2 with solid white hair and always had a cigar :)

Worked for Mr. Fridell two summers…‘70-71 while in high school…Absolutely the BEST popcorn you’ve ever had…popper came from his previous walk-in theater on Main Street from back in the 40’s…great job…worked the ticket sales AND projectionist…the cue marks STILL haunt my movie viewing…

The Berkeley Drive In was founded by my grandparents, William T and Lois Thornley Friddell. Only after divorce and the re-marriage of William T Friddell to the former Mary James did it come under the auspices of “W. T. Friddell and Mary Friddell.” For the record, my step-grandmother, Mary James Friddell, was a lovely person and is only recently deceased.

If you think that name is odd then you are obviously not from eastern South Carolina. It is the legendary nickname of Francis Marion who fought the British in that swampy area during the revolutionary war. Mel Gibson’s character in The Patriot was very loosely based on him. Very, very loosely. Leslie Nielsen played the Swamp Fox in a Disney TV series of that name which occasionally ran as part of Disney’s Sunday night show.

No, i’m from Australia!!

Hi Buster Dangerfield, I am the Oral History and Digital Projects Librarian for the Berkeley County Library System. Thank you for the clarification about your grandparents. I was a little confused. I would love to speak to you and perhaps make copies of any photos you have of the theater or your grandparents during the time they owned the theater. You can contact me directly at eight-four-three 719-4240 My name is Ramona Grimsley.

Hi Buddy Burnett. I am the Oral History and Digital Projects Librarian for Berkeley County Library System. I am cataloging a dozen or so Berkeley Drive-In Theatre programs from the late 1960s. I am trying to add historical background information about the history of this drive-in. From what I have read, this is the information I have gleaned: The Berkeley Drive-In Theatre, owned by W.T. & Lois Thornley Friddell, opened in 1950. It had a parking ramp that would hold 200 cars. Due to Mr. Fridell’s ill health, in January 1975, the drive-in was leased to Consolidated Theatres, Inc., based in Charlotte, N.C. The drive-in was renamed The Swamp Fox. Regular feature films were still shown, but Adults Only late night XXX movies were added. (Consolidated, at that time, was operating the North 52 Drive-In and the Magnolia Drive-In in Charleston) both of which showed XXX movies. In 1984, Consolidated Theatres ended its lease and the drive-in was operated by an independent operator (_______ Burnett) who promptly discontinued the adult movies. In 1986, the drive-in closed for good. It was demolished on June 1, 2006. The property was redeveloped for retail use. Please correct any of the information that is incorrect. I would love to speak with you about your time at the Swamp Fox. My name is Ramona Grimsley. My direct line is eight-four-three 719-4240.