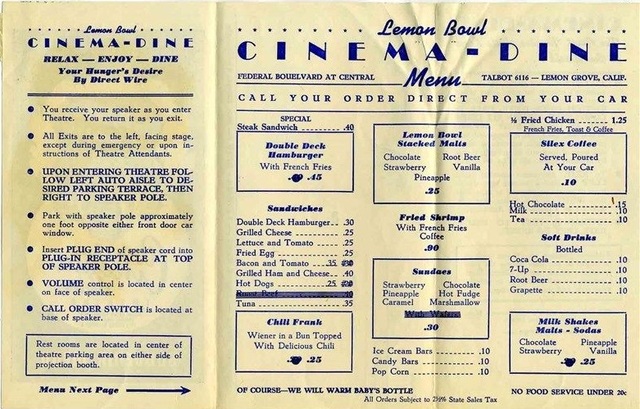 This was a San Diego area drive-in theatre that opened November 22, 1947 with Cary Grant and Shirley Temple in “Batchelor & the Bobby Soxer”. It had a capacity for 650 cars. It closed in 1953. It was demolished in the 1970’s for an automobile dealership.

The unusual name stems from the fact that it had, for the time, an extensive concession menu and that the speaker poles had intercoms that patrons could use to order food and soft drinks which would be delivered by carhops. The theater also had a miniature golf course.

There is a picture of the Lemon Grove Cinema Dine on p.83 of this online book (you may have to scroll up or down to see it or use the tool at the top of the page): http://tinyurl.com/244x8wh.

There is reminiscence about the theater here: View link and its gallery page at Drive-ins.com has a small picture of the eat-in-your-car menu that will enlarge a bit if clicked upon: http://www.drive-ins.com/gallery/catlemo

Could use more info and photos.

Correction, the link povided by CSWalczak states that it closed in 1953.

Located in Lemon Grove, but the screen tower and the menu that has been uploaded to the photo page both advertised it as the Lemon Bowl Cinema-Dine.

The Lemon Bowl Cinema Dine was San Diego’s second drive-in theater, opening shortly after the Midway DI. The 1948-49 Theatre Catalog lists its original owners as C.E. Norcross, Suburban Theatres Inc. of Loma Linda, California. Ira Durham and Oliver McNeel operated the theater through 1953, before leasing it to Sero (which had opened San Diego’s third DI, the Rancho) for one or two final seasons. The lot included a restaurant, where snacks and dinners were served, as well as prewarmed bottles of baby formula, delivered for a time on carts that could only navigate horizontally along the lot’s flat surface aisles. With no local advertising after September 1954, it appears this ozone was torn down even before the nationwide atrophy of drive-ins began, to make room for access to the 94 freeway, with a portion of the property eventually housing a Toyota dealership.

CA 94 runs through the center of the former drive-in site. The front and back parts are now Edco recycling Center and a portion of College Grove Shopping Center.