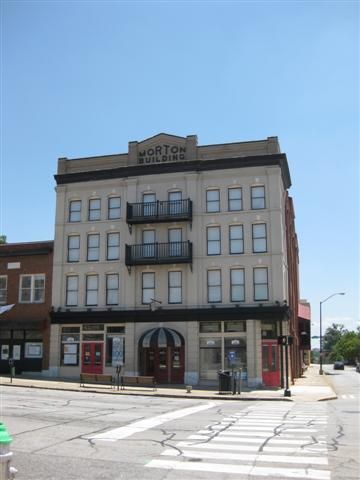 The Morton Theatre and Building was built for prominent early 20th Century African-American businessman Monroe Bowers "Pink" Morton. It once was part of Athens' bustling black business district, most of which is no longer standing.

Built in 1909-10, the theater opened in spring of 1910, with a piano concert, attended by both black and white patrons. For most of its early decades, it was a live performance space, with vaudeville and stage shows filling the bill. It wasn’t until into the 30s that films were shown at the Morton.

The theater also remained an important meeting hall for Athen’s African-American community for decades until closing in the 60s after a fire.

The Morton could seat about 550, and when it opened, held two small balconies, four boxes and seating for about 300 on the orchestra floor. When a projection room was installed during the 30s, the tiny upper balcony was taken out.

After the theater closed, and most of the office building remained vacant, a few black-owned small business continued to operate on the street level. However, during the 60s and 70s, the Morton fell into a state of disrepair, and by 1980, the Morton Theatre Corporation was founded, with a goal of rescuing the historic showplace from being lost forever.

By the mid-to-late 80s, nearly $2 million had been raised to restore the Morton to its original appearance.

Also during the 80s, the auditorium was sporadically used by local bands, including R.E.M and the B-52s, for rehersal space and filming videos.

Since the early 90s, the Morton has been under the joint control of the Morton Theatre Corporation and the Athens-Clarke County Unified Government which operates the theater as a community performing arts center. It is also the home of the Morton Heritage Players, which presents contemporary African-American theater productions.

Near Athens in the Town of Hartwell GA was another theatre called the Julie. It is now an Ace Hardware Store, but the current owner recalls going to the movies at the Julie. The name came about because the family that owned the Julie and another one across the town square along with a drive-in south of town were all named after the owner’s daughters. Sadly, none of them today exist.

The Julie had a ‘crying room’ which I had never heard of. It was a special area in the back where a mother could take her crying child so as to avoid bothering fellow patrons. Great idea!

Just read in a great book entitled How They Met by Joey Green about Laurel and Hardy. Ollie Hardy was born in Harlem GA and attended the University of Georgia in Athens GA. He dropped out of college and “opened a movie theatre”! Interesting!

If you’re lazing around on your hammock this holiday weekend, with your laptop of course, you may wish to peruse this master’s thesis on African-American theaters in Georgia. There are sections on the Morton as well as several other theaters:
http://tinyurl.com/kftsq

Here is a photo and some information about the Morton:
http://www.athensclarkecounty.com/tour/tour6.htm

I hope I’m making this up, but I could swear the last time I visited Athens, this place was closed down. I think it’s a handbag store now. If that’s true, what a sad turn of events for such a classy old theater.

Wait, forget what I just said. I just went to the Morton website and they’re still open and running and doing events. I must have been confused when I was walking around downtown. Sorry, y'all! :–)