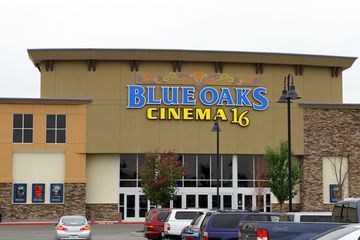 Located in a former Mervyn’s store in the Blue Oaks Town Center shopping center, which opened in 2006. The Blue Oaks 16 opened on November 19, 2010. It is a ‘state of art’ all digital cinema.

The Blue Oaks 16 was built and initially operated by the SR Entertainment Group, a small chain headquartered in Santa Rosa, CA. A few months after the November 2010 opening Cinemark acquired a large parcel of land nearby and announced that they would be building a competing multiplex along with other retail on it. SR Entertainment must have seen the handwriting on the wall, mainly too much competition. In January 2012 SR sold the Blue Oaks 16 to Cinemark. The plans for the nearby Cinemark multiplex are now on hold, I suspect indefinitely!

Too bad for us locals. We could have used more movie choices (especially independent and foreign flicks!) in our area. Besides the presentation and friendliness of the staff seemed a couple notches higher at the Blue Oaks than at your typical Cinemark operation. They also showed a less distracting pre-show program, primarily just local advertising. Now we have to suffer through that Godawful Cinemark 20 minute video compilation of loud commercials masquerading as entertainment.

Like so much else in 21st Century corporate America the big companies get bigger and the small ones get smaller…or just fade away! Nice seeing you here and goodbye SR Entertainment Group!

Most of the theaters within this Cinema are unusually small. Found the noise from the project to be extremely distracting while watching a film.

JohnRice, I am sad to hear that Cinemark has bought out the megaplex.

This weblog post from Hoefer Wysocki Architecture, designers of the Blue Oaks 16, has a couple of renderings of the theater, including an interesting isometric of one of the auditoriums.

This article by Andreas Fuchs in Film Journal International gives some details about the innovative design of this house, which eliminated projection booths altogether.